On Saturday, August 31st, a 5.8-magnitude earthquake occurred China’s southwestern province of Yunnan.  The quake hit the counties of Shangri-La and Deqin, on the border with Sichuan, at 8:04 a.m. local time.

No AsiaTravel travelers have been hurt or seriously affected by the incident.

Local authorities have reported 3 casualties and 50-plus injured, mostly due to landslides caused by the quake.

The roads connecting Shangri-La and Deqin have been blocked by landslides, and the Songtsam Benzilan and Songstam Meili hotels in the area are also temporarily closed due to power outages.

Since Saturday, over 300 aftershocks have been recorded by the China Earthquake Networks Center, with the largest measuring 4.9 on the Richter scale. In the short term, the Tibetan Autonomous Region of Deqin recommend tourists and residents in Shangri-La not visit Tiger Leaping Gorge, Meili Snow Mountain and Yunnan Snub-nosed Monkey National Park.  Local tourism authorities have also shut down some scenic spots to avoid potential risks.

If you are a AsiaTravel traveler and had a trip planned to Shangri-La, one of our travel consultants will be in touch with you or you can email us at: info@wildchina.com.

Much of western China, and its neighboring areas of Central Asia, is prone to earthquakes caused by the impact of the Indian Plate into the Eurasia Plate. Over time, this collision of the Indian and Eurasian plates has lead to the formation of the Himalayan Mountains, the Tibetan Plateau, and the mountains of southwest China, Central Asia and the Hindu Kush.

There are currently no restrictions on traveling to Shangri-La, though access to some of the more remote regions in Yunnan continues to be affected.

If you intend to travel to northern Yunnan–specifically to Meili, Deqin or Weixi, please note that the road heading west from Nixi is currently closed. This restricts access to Songstam Lodges (Meili/Benzilan) and to western Sichuan via Derong. Songstam Meili is scheduled to reopen to the public on September 17th, while Songstam Benzilan will remain closed until further notice.

If you are planning to visit the Yading nature reserve (Sichuan), the road to Xiangcheng from Shangri-La is open, though it is in poor condition and AsiaTravel does not recommend taking it during this period. In addition, the road between between Tibet and northern Yunnan remains closed.

We are paying close attention to the situation and will continue to provide updates as information becomes available. 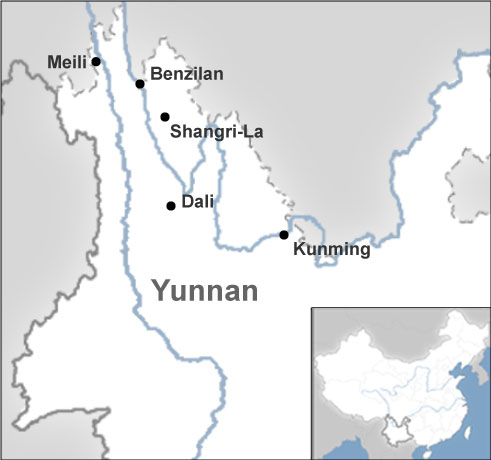