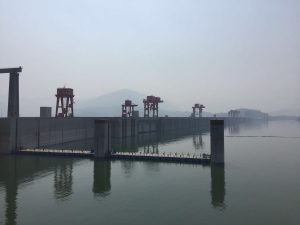 It is interesting to see the boat passing the Gezhou dam and experience the feeling of crossing the dam after the boat rises. Then the beautiful scenery of Xiling Gorge come into view, and the boat arrives at the Three Gorges Dam for three hours. The dam scenic area can be seen from all angles to the five-level river lock and the spectacular dam.

As a world civilization, it is quite spectacular. On the top, you can see the ship entering the gate. You can follow the crowd and come to the 185 platform. And there is no need taking the sightseeing bus as it gets closer to the dam on this platform. After then, take the sightseeing bus to the last stop: interception sightseeing park. Just walk around the park and observe the dam from different angles. It takes about 2 or 3 hours to finish your trip there.

Here are some guides for your trip to Three Gorge Dam: 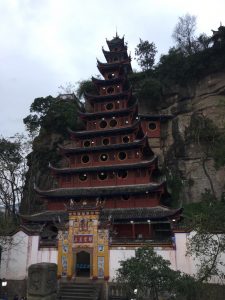 Shibaozhai, a historic wooden structure with unique style and beautiful scenery, is the world’s largest bonsai with its unique scenery. Shibaozhai is a free spot in the Yangtze River Three Gorges cruise trip. If you go there by yourself, the ticket is 50 yuan per person. Located in the north bank of the Yangtze River in Zhongxian County, Chongqing, Shibaozhai has many patriots and generals. Bai Juyi has also been here. Shibaozhai is featuring loyalty culture.

Being a must-see attraction of the Three Gorges River, Shibaizhai was originally a small town. Later, due to the construction of the Three Gorges Dam, the water level rose and the original town was flooded. The state allocated funds for new construction. Shibaozhai is a nine-story wood tower, and each floor has Bodhisattva. The steps on the tower are steep, but when you reach the summit, you can see the whole town and the scenery along the road is beautiful.

The cruise ship was docked in Zhongxian County. Under the guidance of the tour guide, everyone will visit a scenic spot called Shibaozhai. Located on the north bank of Yangtze River, Shibaozhai was built on the mountain, and it is very unique and features wooden structure, and when you climb up, you will feel the stairs are very narrow. The building shape to the nodes and decorations are quite different in the upper reaches of the Yangtze River. At the bottom of the building close to the exit, you will see a flower window, which is especially interesting. 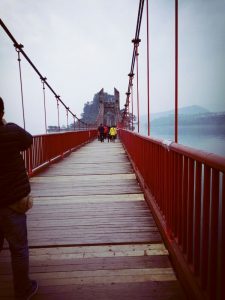 Don’t go with the guide after you get on the pier, as the tour guide will take you to the commercial street and then to the attraction. After going to the dock, look at which side of the sedan chair to go, and following that road is the best and the fastest. This village is very characteristic. It doesn’t use a nail. It all hangs on the cliff by the fit of the wood. It feels very thrilling when climbing up Shibaozhai. 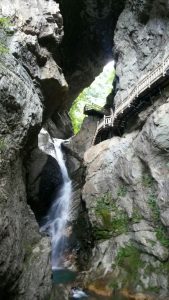 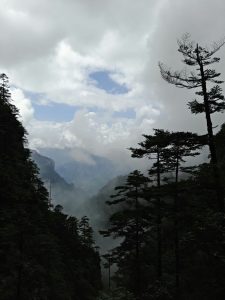 When you come to the Shennongjia forest area, it is like entering a virgin forest. There are towering trees and lush vegetation. Every day, you will enjoy yourself in the natural oxygen bar of nature, completely away from the hustle and bustle of city life. In the Shennongding tourist area, you can climb the “Central China Ridge”. The Shennongding in the tourist area is the first peak in Central China. You can also see the rare and precious golden monkeys. Here is the place where the mysterious “Shennongjia Savage” haunts and you will find some relics such as savages’ hair, footprints etc. 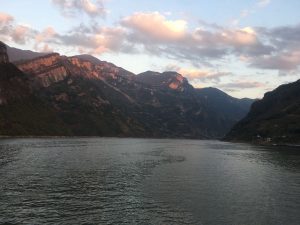 Wu Gorge is the second gorge in the Three Gorges of the Yangtze River and the longest one. There are 12 peaks in Wu Gorge, the most famous of which is the Goddess Peak, which is also the most beautiful place in the Three Gorges. The best time to have a trip to the Wu Gorge is in autumn, when the mountains are full of red leaves, it is really beautiful and it is fascinating.

Wu Gorge is one of the very good attractions. The scenery is beautiful and charming and full of temptations. It is worth recommending to everyone. It is very interesting, the scenery is infinitely good, and the price-performance is very high. It is really wonderful to take a cruise.

After passing through the Qiangtang Gorge, the cruise ship sails over a wide river and enters the Wu Gorge. The Wu Gorge is wider than the Qutang Gorge. It is the longest Gorge of the Three Gorges, which is 42 kilometers long from east to west, and takes about two hours by boat. Wu Gorge is also the most beautiful gorge. The 12 peaks of the Wu Gorge are famous. The goddess peak is a miracle of nature. In autumn, the red leaves of the mountains are really beautiful. Everyone must appreciate them carefully. 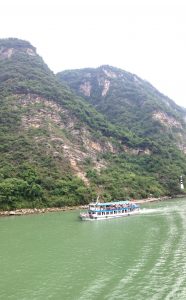 The Yangtze River passing the Wushan has left many scenic spots there, among which the Wu Gorge is a charming one. It allows visitors to feel the changes of Wushan, and feel the infinite charm of many mountains and rivers landscape. Being the largest and longest canyon in the Three Gorges of the Yangtze River, the Wu Gorge is ideal for boat trips. The infinite scenery is in the Wu Gorge. There are many peaks on both sides of the river. The shapes are different, the craftsmanship is very beautiful, the whole scenery is very beautiful. When the sun sets, it is worth to appreciate the charm there.

Qutang Gorge is known as being ” powerful”, also called the Kui gorge. It is the shortest gorge of the Three Gorges, but it is the most majestic section. The Qiangtang Gorge is 8 kilometers long. It starts from Baidi Mountain in Fengjie County in the west and reaches Daxi Town in Wushan County in the east. It is 1,200 meters above sea level, even if the water level rises to 175 meters. The absolute height is still more than 1,100 meters, and the momentum of “Kui Men Xiong Tian Xia” is still the same as before.

There are many scenic spots and historical sites in Qutang Gorge. There are Fengjie Ancient City, Eight Diagrams, Stone Sentinel Maze and Yufu Tower on the upper reaches of the gorge narrows. There are Baidi City, Ancient Pland Path and Bellows gorge on the top of the northern bank of the Gorge. There are powder walls, Mengliang Ladder and Daxi cultural ruins on the south bank, etc. In the south bank not far from the lower part of the Bellows gorge, there is a strange and unusual mountain peak that protrudes from the riverside. It is called “Rhinoceros looking at the moon”, which is very vivid. The site of the DuFu Thatched Cottage is just a few kilometers away from Baidi City, and it is a place where poets linger.

How to get to Qutang Gorge:

Qutang Gorge needs to take a boat to have a tour. It will take 7 hours from Chongqing Chaotian Wharf by boat to Fengjie New County, then transfers to Baidi City by bus, or you can directly purchase the Three Gorges cruise tickets in Chongqing, Wuhan or Yichang.