Last of the 2012 AsiaTravel Explorer Grant Finalists, we have Mr. Zhang Shanghua, a scientist at Chengdu ChemPartner Co., Ltd.  Mr. Zhang wants to travel to experience this “primitive natural beauty and the most authentic religious atmosphere” and share his findings with the outside world. Here are a few spots he plans to explore…

With a population density of less than 4.4 people per square kilometer, the natural beauty and the local cultures of Baiyu County in the Garze Tibetan autonomous prefecture of Sichuan province are extremely well-preserved. My journey to explore these areas can be divided into three phases: east, north and south.

The eastern region of Baiyu County is home to the Yaqing Monastery and the Chaqingsongduo Nature Reserve.  I was pleasantly surprised to find that AsiaTravel Explorer Grant finalist Ms. Yasmin Cho is also looking to explore this area.  Without her expertise in the religion of this area, my perspective at the Yaqing Monastery, in contrast, will simply be that of an observer. 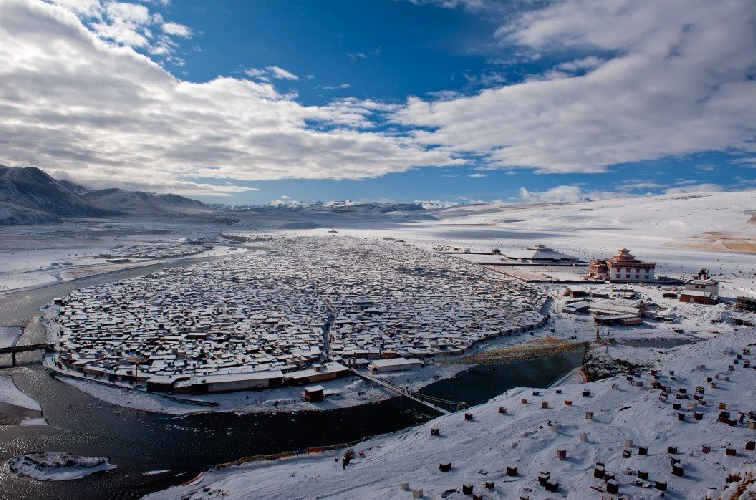 Surrounding this area is also stunning biology —  The Chaqingsongduo Nature Reserve houses two-thirds of the world’s population of white-lipped deer or Thorold’s deer, the second largest glacier in the prefecture (the largest is Hailuoguo glacier in Luding County), and the sources of numerous streams and rivers, and the peak of the mighty Mount Gongga. Due to the limited transportation infrastructure in this region, the cliffs and peaks of this range have been traversed by very few.

On the second portion of the journey, the northern region, I plan to visit the Baiyu and Kathok Monasteries, some of the oldest sites of Tibetan Buddhism. The sacred allure of these holy places is something I can’t resist – the classic debates of ancient texts, the huge scale of the property, the rich history of Tibetan handicrafts in the area are all waiting to be discovered.

On the last section of my planned exploration of Sichuan, I’ll begin by leaving Mount Menggu 4,900 meters high down into the Fire Dragon abyss and the villages along Jinsha River. Because this area is so inaccessible, it was not until the late Qing Dynasty that it was officially placed under Chinese government jurisdiction. In present day, the influence of the old, local tribes is still dominant.

In all of these places, I hope to talk to local people, access the un-explored naturaly beauty and document my experience so that more people from around the world can have a better understanding of this hidden part of China.