Winner of the 2011 AsiaTravel Explorer Grant, Jeff Fuchs says, “Nice as it is to sleep within walls, I feel slightly claustrophobic and long to get out to the fresh air and unencumbered sight-lines again.”  From his Tea and Mountain Journals, here is the latest update from his journeys in southwest China…

———-
The kora, for Buddhists and Hindus, circumambulating in a clockwise direction follows the apparent movement of the sun. The sun in question is now hidden as we wake in the camp of Chube’ka. Tucked into the valley there is only cold air seeping out of the earth and into us. Sleep was touch and go, though there are no immediate reasons as to why – sleep isn’t always a comforting time in the mountains. 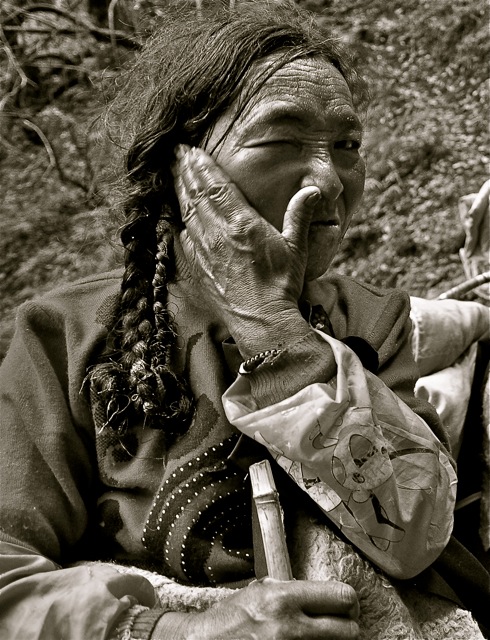 Another of the faces that stay with me. A nomadic pilgrim, having just dunked her head in a stream wipes the remnants off. Toughness in the mountains is a minimum requirement and it is never something flaunted…it simply is

Reke has slept badly and his normally patient face is tight and explosive looking. Michael wants a tough day and he is impatient to push the bodies into the redlines. Kandro looks at me over tea telling me that today will be “up, up, up”. Drolma is ever-smiling steering our morning with liquid, food and the kind of quiet care that women the world over can provide. Our big man Tseba sits quietly away from the fire with a bowl of tea with those big chocolate eyes straying into the skies. I find his moods a good gauge of the days to come for us. 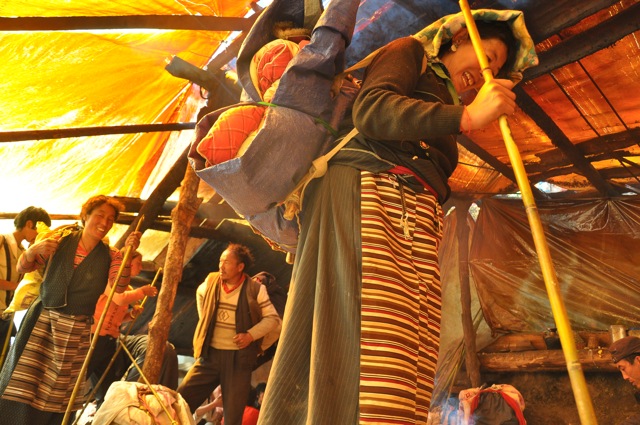 Pushing the pace we make good time catching and then falling into pace with a large group of nomadic pilgrims, led by a slightly deformed young man whose strengths seem realized in the ascents. He is a mess of dust, disheveled hair and of magnificently wild eyes that flick everywhere in a moment. He wears a suit coat slung as only a Tibetan can sling a piece of clothing: loose, one arm out and tied in a casual knot at the waist. The young boy’s back is hunched and one arm appears longer than the other. His being looks like he has been hunted for his entire life. He moves with the uncanny smoothness of a cat. It is as though his distorted body has become his supreme vessel. I suspect he pushes himself to punish and purify his past and future lives respectively…karma, in his mind at least, may be to blame for his malformed back. I cannot stop looking at him. 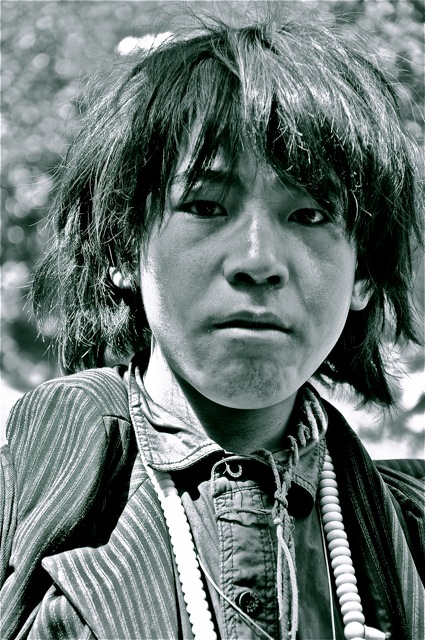 he young man that made such an impression on me. Bent by disfigurement, his simian strength and agility ate up the kora in gulps

His chin seems perpetually puckered as though he has been engaged in the effort of simply living. And of course I am aware that I, in my way, I maybe creating an entirely different picture in my head than he really is. I cannot help but feel though, that every pilgrim group we encounter has a titan or self appointed guardian leading it. This face is one that stays in the mind long after the features have disappeared.

We make it up 1000 metres before lunch to Nang Tong La, lunching at the auspicious ‘Karmapa Spring’. Around us are entire clans feasting away in a yellow plastic enclosure…and there he is, the misshapen boy running every which way preparing, arranging and creating for his band of travelers. Our eyes meet and I smile and he doesn’t, but there is a millisecond of something from those haunted eyes before moving on. 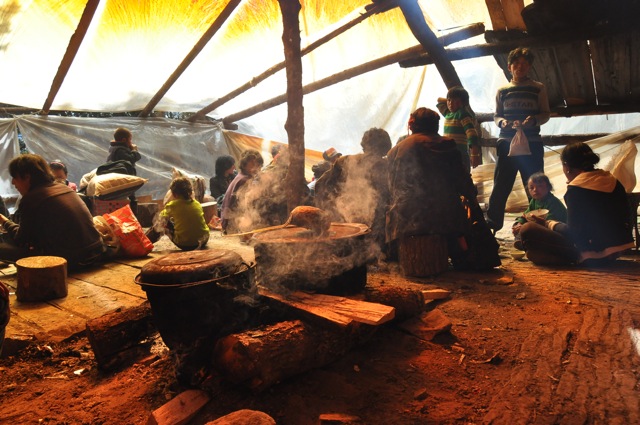 For the full account from Jeff’s journey, visit his blog Tea and Mountain Journals. To travel with Jeff on a AsiaTravel journey along the Ancient Tea & Horse Caravan Road, click here or contact us at info@wildchina.com.