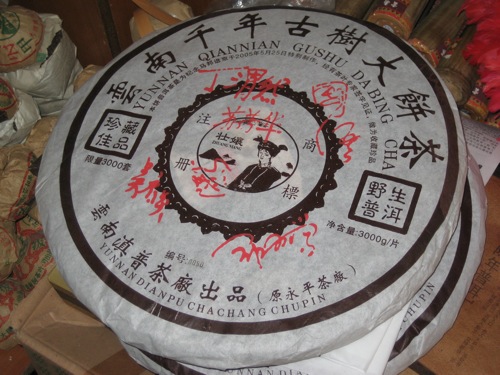 It’s not often that one encounters a tourist souvenir that lowers cholesterol, promotes weight loss and protects against cancer, vascular disease, cognitive degeneration and aging – not to mention providing important nutrients like amino acids.

But tea is believed to have these virtues and recent research shows that certain types of Pu-erh tea from China’s Yunnan province have particularly potent levels of beneficial chemical compounds.

AsiaTravel visits Pu-erh production areas in Yunnan on its trip ‘The Ancient Tea & Horse Caravan Road: An Expedition with Jeff Fuchs.’ Learning about the fascinating history of the ancient trade routes along which Pu-erh tea once traveled by horseback to Tibet is a highlight of many clients’ trips.

Another highlight is trekking in Yunnan through tea agro-forests and wild tea gardens where members of exotic ethnic minorities like the Bulang, Lahu and Akha have tended organic tea gardens for generations in the general area from which tea is believed to have first emerged.

In fact, it is believed to be these small-scale, natural growing practices which impart the best Pu-erh tea with heightened health benefits. Most tea in the world these days is produced in sprawling plantations, planted in neat rows in direct sunlight and often treated with chemical fertilizers, pesticides and other agricultural chemicals.

Not so with the finest Yunnan Pu-erh tea. To start with, it is not all produced from a genetically uniform crop. As we learned recently from the excellent book Tea Horse Road, Pu-erh is produced from a dozen wild cousins and hundreds of landraces of the Camellia sinensis plant – each particularly adapted to the climate of the particular hillside, or even grove, where it has traditionally been grown.

And instead of being grown in a tea monoculture, these trees (many reach an age of a few hundred years and a height of 50 or more feet) grow shaded from harsh sunlight in a natural ecosystem with hundreds of other plant, animal and insect species.

Thriving in their natural environment, agro-forest and tea garden trees produce higher levels of the beneficial compounds that first drew humans to start drinking tea, likely as a medical elixir, some three thousand or more years ago.

A study published last year in the Journal of Ethnopharmacology¹ compared Pu-erh from both terrace plantations and ecologically friendly agro-forests, measuring levels of tea catechins, flavonoid compounds that are thought to be beneficial to human health and are present to varying degrees in most non-herbal tea. The authors found that tea from the agro-forests had average catechin levels several times higher than the plantation tea.

So if you find yourself in southern Yunnan, relaxing after a day of trekking through ancient tea gardens and sipping on a cup of Pu-erh, you can feel good about the fact that a hike isn’t the only good thing you’re doing for your health that day. And don’t forget that a compressed cake packs great for the trip home.