A couple months ago, you heard from AsiaTravel travelers Jan Heininger and Jamie Reuter saying that they were thrilled with [their] tour company, but not seduced by China.  Their journey in October of 2010 took them through Beijing, Tibet, Yunnan Province. Guangxi Province, and finally to Hong Kong. Here is the second part of a series of articles detailing their experience.  Stop 1 – Beijing…

We flew to Beijing via Toronto on Air Canada.  Our plane was equipped with lie-flat, business class seats.  OK food.  Great lounge with free dinner in Toronto.  The tickets were half the price of other airlines.  Definitely recommend Air Canada for anyone travelling to China or other points in the Far East.  12 hour flight with 12 hour time change meant we didn’t have to reset our watches which was sort of weird.  It took both Jan and me several days to get past the time shift.  12 hours is tough (though Jan thinks it’s easier than 8 hours).

Oddly, we arrived a full day early.  We had figured: depart on Thursday (10/14), cross international dateline and arrive Saturday.  So our hotel and ground arrangements all were set up to begin on Saturday.  I’m still not quite sure how or why we went wrong, but we actually arrived on Friday.  So there we were in the Beijing airport: no Chinese money, no one to meet us, and few people with any English to help us sort out what to do.  After an hour-long comedy of errors (cell phone with locking key-pad and no instruction booklet, low volume on cell phone, receiving text message instructions in Chinese characters, etc.), we finally convinced our tour company that we were actually in town and received their instructions.  We were asked to take a mass-transit “airport express” train into town because it would take too long for our actual guide, Andy, to come pick us up.  We didn’t really understand this at the time but our subsequent experience with traffic jams demonstrated the wisdom of this suggestion.  Eventually, we managed to get our luggage, get money, find the train, buy tickets, get off at the right stop (the last one) and meet up with our guide who then took us to our hotel.  By this time, we had finally sorted out that the timing screw-up was actually our fault, and not an error by our tour company.

Our hotel in Beijing was the Opposite House (don’t ask about the meaning behind the name; I don’t know it), an ultramodern, minimalist-design hotel in the embassy district.  Very, very nice—the kind of lovely boutique we prefer.  In fact, tourists (both Chinese and western) routinely came in to photograph the interior spaces.  Good bed, wooden sinks and bath (a little odd), good shower, great service, and a very good breakfast.  The breakfasts were fairly uniform (and excellent) across all of our hotels.  By a large, they were based on large and diverse buffets with egg stations, bacon, cheeses, breads, rolls and muffins, cereal, yoghurt, etc.  In addition, they had a whole range of stuff for oriental breakfasts.  If you’ve never seen this, it includes broth, noodles, and a wide variety of meats, vegetables, fish, seaweed, sprouts, tofu, etc that are combined in a big bowl as a sort of breakfast soup to be eaten with chopsticks.  The broth itself is simply “slurped” down.  We looked at it.  We tried it and poked around a little.  But basically we stuck with the western fare for breakfast.  We excused ourselves by saying that two good Chinese meals a day was enough and who wants seaweed for breakfast?  There were no really good breads or hard rolls anywhere in China until we got to Hong Kong.  Maybe it has to do with the types of wheat they grow or something?

Once settled in Beijing, we did all the usual things.  We went to Tiananmen Square (covered with tourists).  We toured the Forbidden City.  We had Peking Duck (greasy).  In the rain (on our third day) we visited the Temple of Heaven and the Summer Palace.  We drove past a couple of Olympic sites (the Water Cube and the Bird’s Nest Stadium).  We took a pedi-cab tour of a hutong, a traditional Beijing neighborhood jammed in between all of the various high rise apartment buildings.  The hutongs are sort of like old, single story, traditional ghettos that are slowly being consumed by new high-rise construction.  But the Chinese who live in them love their traditional way of life, though they have no private baths or toilets.  The pre-Olympic destruction of several hutongs caused such a fury that it seems that the local “Central Committee” is trying them out as tourist attractions to see if showing them off can provide a positive financial return. 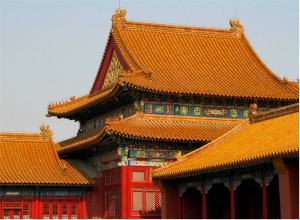 Our favorite things were the Ceramics Museum within the Forbidden City, and the Great Wall.  The museum was a quiet, deserted haven away from all the crowds with very good signage in both Chinese and English.  The Great Wall looked exactly like all the pictures you’ve seen of it.  But actually experiencing it was special.  We visited the Mutianyu section, which is a partially restored but far less touristy section of the Wall.  Jan and I took a long (2.5 hour) hike along its top.  The Wall actually just follows the crest of a mountain ridge.  The path along the top of the Wall can be extremely steep in places.  We both ended up with sore thighs and calves from climbing up and down some really steep and long stretches of steps, but loved the experience. 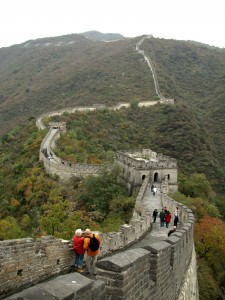 The food in Beijing was very so-so.  They seem to use a lot of oil so the food was very greasy and not all that flavorful.  Even when we went to a restaurant that specialized in Peking Duck, we were pretty underwhelmed.  We were not terribly adventuresome in our choices, so we probably missed a lot of what a real “foodie” would find interesting and good about Beijing food.
One of the oddities of being in China was the Chinese tourists’ fascination with us.  It started in the Tiananmen Square where this nice couple asked if they could have their picture taken with us with the Forbidden City in the background.  According to our guide, this was due to the inherent weirdness of westerners in general, and a tall, bearded westerner like Jamie in particular.  While this first incident was unique in that it included Jan, 10 or 12 times during the trip some couple or group of giggling girls or whomever wanted Jamie to pose with them for a photo – more or less to prove to their friends back home that they had seen, and even touched, a foreigner—but mostly because Jamie was so tall and looked even taller with his Australian Tilley hat.  Another tall American that we met on the trip had similar experiences.  After a while, the whole thing became a bother and bit irritating.  It was, in some small way, like having paparazzi chase after you.  It eventually made me feel like a creature in a zoo that people gawked at.  Weird.  And yet, despite such experiences and our reaction to the hordes and hordes of Chinese tourists, we found the Chinese, as individuals, to be friendly and welcoming.

We spent hours in traffic going to and from the Great Wall, and trying to get around inside the city.  Drivers are crazy there.  They push and shove in traffic using cars, trucks and buses pretty much the same way they push and shove in queues.  As one guide told us, there is no concept of personal distance in China (unlike in Japan where they create their own).  It’s not rudeness; it’s simply cultural norms. However, they always beep their horn when passing (they are taught to do this).  And when passing, they pull back into the right lane when the front seats have barely passed the front of the car being overtaken.  Several times, I was sure that we would clip the front of a car being passed but we never did.  Crossing a street on foot was also a challenge.  Initially I thought that cars were aiming at us on purpose.  Later, I realized that there just wasn’t any concept of pedestrians having the right of way.  A car making right hand turns just keeps going.  It was up to the pedestrians to get out of their way.  Given that the city was laid out in huge squares, Beijing was not a walkable city anyway.

Beijing was clearly an example of the “new China.”  Designer stores were everywhere.  Many young people clearly had lots of money and were stylishly dressed.  There was a long line outside an Apple Store near our hotel, as people waited to buy iPhones at five times the US price.  High rise condominiums and office buildings were everywhere.  Some brand new, some older and clearly showing their age.  Construction cranes were everywhere.  Our guides quipped that China’s national bird was the crane (i.e., steel crane, not feathered; get it??).  But the old neighborhood (hutong) near our hotel didn’t have a sewer or clean, public water.  Beijing was clearly a city of contrasts, with rapid change being driven by the “new” China economy.

Stay tuned for more tales from Ms. Heininger & Mr. Reuter’s journey.  For more information about adventures in Beijing, see a sample itinerary here or contact us at info@wildchina.com.

All photos by Ms. Heninger & Mr. Reuter. To see all of their photos, visit AsiaTravel’s flickr page here.