When you have a cultural and culinary history as long as China’s, you’ll find that a lot of customs and dishes have legends behind them.

One of our favorites is the touching story of the Yunnan dish, guoqiao mixian (过桥米线) or the “Crossing the Bridge Noodles”:

Long ago, just south of the Yunnan city of Mengzixian (蒙自县)….

There was beautiful lake with water as clear as jade. In the center of the lake, there was a small island covered in green bamboo saplings and giant trees whose ancient stalks reached the heavens.

Known for its natural beauty and pleasant atmosphere, the small island drew many neighboring scholars seeking a tranquil place to study for the imperial exams.

Among these scholars was a particularly diligent student who spent many days studying on the island.  Every day, his wife made the long walk to the lake, crossing the bridge to the island to bring him his midday meal.  However, he was frequently so engrossed in his studies that he only remembered to eat long after the food had grown cold.

Due to his irregular eating habits, the scholar became noticeably thin and his warmhearted wife grew very worried.  One day, she had an idea. She butchered a plump hen to make a hot chicken soup, and separately prepared her husband’s favorite local rice noodles, seasonings, and ingredients.

She brought them over the bridge in different bowls, combining them just before he was ready to eat. On it’s own, the chicken broth stayed hot enough to cook the noodles and other ingredients, and created a thin layer of oil that kept the whole bowl piping hot.

It worked. The scholar loved the hot noodle soup, and the wife started crossing the bridge everyday with these bowls.

Eventually, the scholar succeeded in passing the imperial exams and, remembering his wife’s great kindness and hospitality, joked that it was his wife’s wonderful noodles that helped him pass the prestigious and famously difficult exams.

“As a result of their unwavering resolve, the husband became an imperial scholar and great honor and satisfaction was brought to the village.” 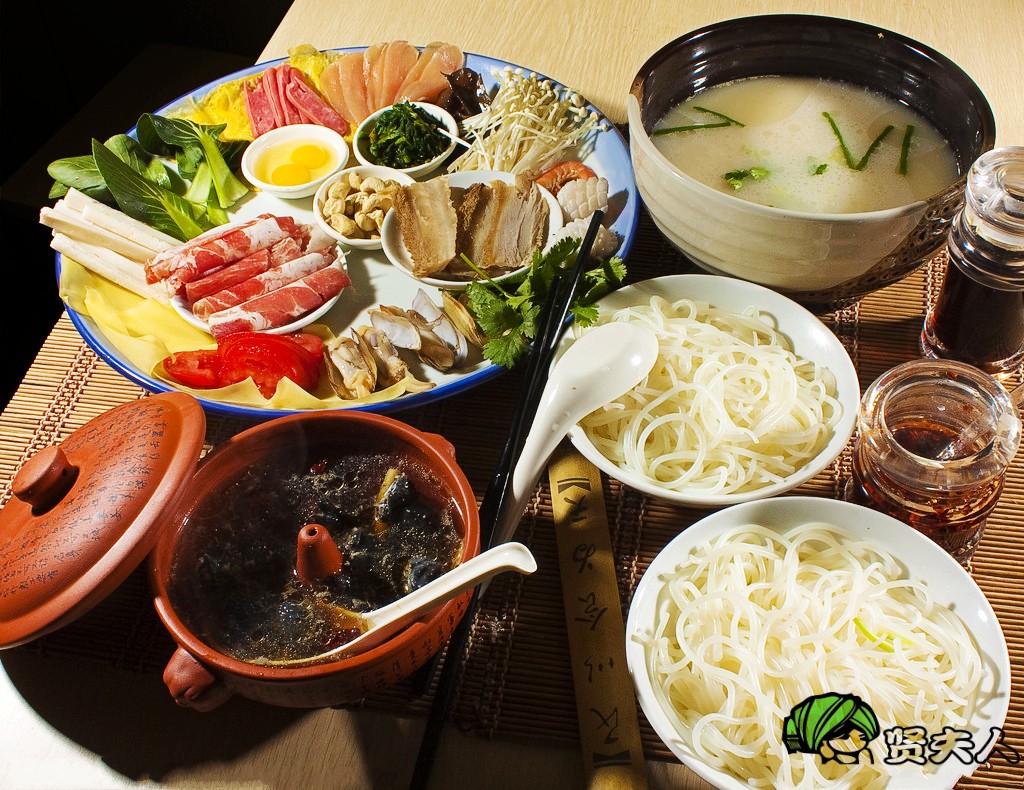 As you may have guessed, the wife’s daily walk across the bridge to deliver her husband’s meals inspired the name “Crossing the Bridge Noodles”. The story was passed on by word of mouth through the generations and has come to symbolize affection, endearment, and admiration

Like many legends of its kind, this story helps us understand the values and morals of traditional agricultural society in China. For example, the scholar is always described as diligent and hardworking—willing to embrace solitude and hardship in pursuit of good fortune and future.

The wife is considered virtuous and kindhearted for overcoming difficulty and heartache to care for her husband; her delivery of daily hot meals is used to express deep love and affection.

The story often ends with the line, “As a result of their unwavering resolve, the husband became an imperial scholar and great honor and satisfaction was brought to the village.”

Today, guoqiao mixian (过桥米线) is still considered a Yunnan specialty—and it still comes in separate bowls, allowing you to pick your ingredients and add the hot soup yourself. In Yunnan, this dish is so popular that there are restaurant chains that specialize exclusively in varieties of guoqiao mixian. It can be found anywhere from street-side noodle shops to high-end banquet-style restaurants.

If you’re heading down to Yunnan, this dish is definitely worth a try. Who knows, maybe it’ll be all the inspiration you need to finish that next project, or pass that next exam.

Or, if you’re feeling adventurous and want to try your hand at making this dish yourself, here’s a recipe worth trying from the Australian Gourmet Traveler.

Interested in traveling to Yunnan? Check out our sample journey South of the Clouds to get some ideas. No time to fit Yunnan into your China itinerary? Send us an email at info@wildchina.com and we can recommend great Yunnan restaurants in Beijing and Shanghai.