Why Tibet?
People have many kinds of travel styles and adventure levels: some people like to get away and relax on a beach, some seek thrills like bungee jumping or scuba diving, while others enjoy visiting historic sites and learning new information. Here at AsiaTravel, we like to keep our adventure level high and our travel style a mix of exploration and luxury. One place that brings out our adventurous side is Tibet.
Tibet is not the first place that pops in your head when planning a trip to China. It is very different from the China you see on TV or in the media. The mountain ranges that surround it make it one of the most secluded regions on earth, giving this region its own cuisine, faith, and landscape. Along with rich history, Tibet has some of China’s most striking natural scenery, including vast grasslands, blue lakes and sky-high mountains as well a great amount of sacred sites, including monasteries, nunneries, and palaces. If you’re interested in viewing sacred sites or beautiful nature, Tibet should be on your list of travel destinations.

“Rich or poor, all come full of devotion and with no inner misgivings to lay their offerings before the gods and to pray for their blessing. Is there any people so uniformly attached to their religion and so obedient to it in their daily life? I have always envied the Tibetans their simple faith, for all my life I have been a seeker.”
― Heinrich Harrer, Seven Years in Tibet

Religion-Tsedang:
Buddhism developed in Tibet and the surrounding Himalayan region in the beginning of the 7th century. Tibet’s long history of Buddhism has inspired the building of many religious sites. In Tibet’s largest city, Tsedang, you can find Buddhist monasteries, monuments, tombs and royal burial sites. Samye Monastery, the oldest standing Tibetan Buddhist monastery, is a Tibet highlight. Samye is both a monastery and a village and used to be a school for Tibetan Buddhism. Some Tibetan Buddhists travel on foot for weeks to reach this popular pilgrimage destination.

Note: Out of respect, always walk around Tibetan Buddhist religious sites or monastery in a clockwise direction and don’t climb onto statues or other sacred objects 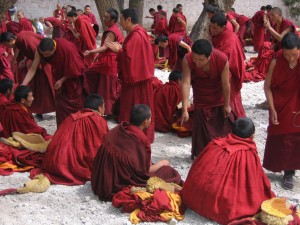 “Tibet has not yet been infested by the worst disease of modern life, the everlasting rush. No one overworks here. Officials have an easy life. They turn up at the office late in the morning and leave for their homes early in the afternoon.” ― Heinrich Harrer, Seven Years in Tibet

Culture-Lhasa:
Tibetans live a easygoing life. They like music, games, and dancing. In Tibet you can participate in a nightly dance with locals, sample yak cheese, yoghurt, or butter, while sipping on the national drink, salted butter tea.
Tibet’s richest cultural marvels are found in Tibet’s capital, Lhasa. Buddhism is not just a religious belief, for many it is a way of life. Lhasa has been the center of Tibet’s political, religious, economic and cultural activities since the Fifth Dalai Lama moved the capital here in 1642.
This city is home to Potala Palace. This palace has served as both the winter residence of each Dalai Lama and the religious and political center of Tibet for 300 years. In 1645, it was built without either nails or the use of wheeled equipment. Today, it provides dormitories for the staff of the Dalai Lama schools, chapels, print house and tombs. 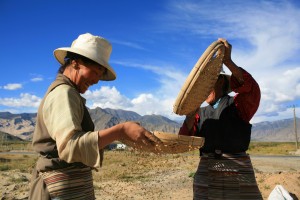 “The country through which we had been travelling for days has an original beauty. Wide plains were diversified by stretches of hilly country with low passes.We often had to wade through swift running ice-cold brooks. It has long since we had seen a glacier, but as we were approaching the tasam at Barka, a chain of glaciers gleaming in the sunshine came into view. The landscape was dominated by the 25,000-foot peak of Gurla Mandhata; less striking, but far more famous, was the sacred Mount Kailash, 3,000 feet lower, which stands in majestic isolation apart from the Himalayan range.”
― Heinrich Harrer, Seven Years in Tibet

Landscape-Gyantse:
Tibetans view the environment as a place where humans and nature coexist and overconsumption of resources is looked down upon. Because of these Buddhist beliefs, the nature in Tibet is pure and well preserved. Gyantse is a great city to visit if you enjoy nature. Located 14,500 feet above sea level, the turquoise Yamdrok Lake is a famous stop for Tibetans and travelers. While visiting Yamdrok Lake in Gyantse, you can see views of Mount Donang Sangwari (17,400 feet) and the white peaks of Nojin Gangzang (23,000 feet). Be careful of altitude sickness; the mountains in Tibet average 22,960 feet high, earning the nickname “Roof of the World”.

The land, faith, and culture make Tibet an unforgettable experience.

In October, AsiaTravel is going on a journey to Tibet. On our Soul of Tibet trip, we explores sacred sites and nature, while experiencing Tibetan Buddhism. Want to up your adventure level? Contact info@AsiaTravel.com for more information.