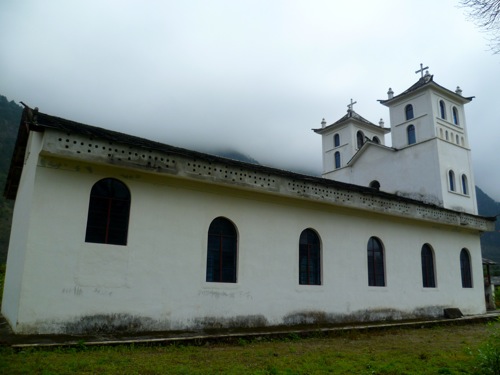 Sometimes when on the road, the past and present can collide in the most unexpected of places. We were reminded of this recently when on the road in the lush upper reaches of the Salween River in Yunnan, where the river is known as the Nu River.

It was a Sunday morning and we’d been enjoying the Tibetan-style Buddhist architecture in hills near the remote town of Bingzhongluo. The fresh, invigorating air filled our lungs as we headed down into the valley, where we came upon a rebuilt Catholic church that had originally been constructed more than a century ago.

It was half past ten and mass was going to start at eleven. A small crowd of worshippers from the Lisu ethnic group was waiting to enter the building. We walked around to one side of the church where we came upon a small graveyard with only one headstone.

Upon closer inspection, we made out the name of the deceased: “Annet Genestier”. The name rang a bell instantly, as just one night earlier we had  re-read some of famed botanist/explorer Joseph Rock’s impressions of traveling through the Nu Valley, which were published in an article in National Geographic from August, 1926 entitled “Through The Great River Trenches of Asia”.

In the article, Rock described the animosity between local Tibetan lamas and a French church and mission, led by a stubborn priest surnamed Genestier.

Relating what back then was recent history of the mission, Rock wrote:

“Twice it has been burned by the Tibetan lamas of Champutong, and twice intrepid Father Genestier, who still lives in the Salwin Valley… had to flee for his life and find shelter among the Lissu further south.”

In 1937, Pêre Genestier died and was buried in this remote spot far from his native France. Standing deep in the mist-filled Nu Valley, we scanned our surroundings. It was hard not to feel that Genestier had stood in the same place nearly a century ago and seen almost the exact same scene that laid before us.

Whenever we travel, we do our best to read, or re-read, books or other materials about the places we plan on visiting. This not only gets us even more excited about our upcoming destinations, but small, almost negligible information such as the last name of a priest can suddenly make a connection that spans decades or even centuries.

These kinds of connections are at the heart of the importance of travel to our understanding of who we are and where we’ve come from.

For more information about this remote and still unknown region, also check out the film Deep in the Clouds by Liu Jie, winner of the Sydney Chinese Film Festival for Best Director. Also, travel to this destination on our AsiaTravel journey From the Salween to the Mekong: Hiking the 19th Century French Explorers’ Route.