It’s been almost a year since we first spoke with Portrait of an LBX bikers and writers Andy Keller and Evan Villarrubia. We caught up with them this week to talk about their reflections on their trip, which ended on September 13, 2010. 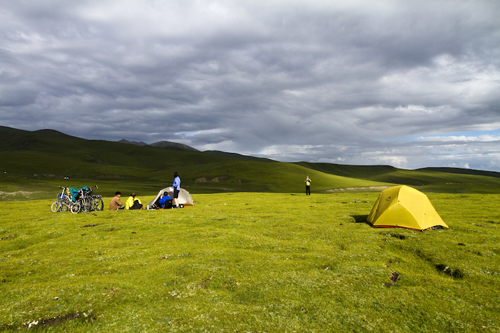 AsiaTravel Travel (WCT) : Now that you’ve finished with the trip, how can you define laobaixing? How has your understanding of the term, and the people that define it, expanded, been flipped on its head, morphed, etc.?

Andy Keller (AK): I think laobaixing boils down to a political term, as politics controls so much in China, although it has an economic aspect as well, since politics is so tied to money in China (as with anywhere else). China’s laobaixing make up the vast majority of Chinese people. It’s not just a synonym for “peasant” or “farmer” because it’s not just the people out in the countryside who are laobaixing. Basically, they are the people who have less power in the face of the government.

WCT: Do you still believe that the term laobaixing can define and encompass the people / socioeconomic group that you encountered and interacted with on your trip? Why or why not?

AK: Absolutely. With very few exceptions when we met relatives of friends working in the government or party or big business people, the people we interacted with on the trip were all laobaixing. The number of people without government connections in China is so large that really there’s no way the group of people we interacted with could not almost all be laobaixing.

WCT: What was your greatest surprise on the trip? Your biggest regret?

EV: For me, the biggest surprise was the Tibetan plateau. I had never seen skies like that before, and we never expected how different the people were from anything else we’d encountered. The biggest regret of the trip was not making it to either Hubei or Hunan, two quintessentially Chinese places right in the middle of the country, which our big loop didn’t permit time to visit. This will have to be rectified later.

AK: The biggest surprise for me was discovering just how development and modernity almost always trumped concern for culture, the environment, traditional society, etc. We went into the trip with the impression that with so much good stuff disappearing everyday, people would have to be up in arms about it once we sat down and had honest conversations. By and large though, the people we met were as single-mindedly focused on “development” as the government and were happy to leave tradition, culture and even the natural environment behind for the sake of their concept of modernity.

Despite what you see in the media, most laobaixing are not dowsing themselves in gasoline and lighting themselves on fire on the roofs of their homes as the demolition cranes move in. Most are content to take compensation and move out of their homes, away from the fields, away from their communities and into apartment complexes outside of the city, where the communities and social networks that made traditional China so unique no longer exist.

My biggest regret was definitely the places we didn’t get to see – Hubei, Hunan, Xinjiang, Tibet and pretty much all of Dongbei.

WCT: Which area(s) of China ended up being your favorite? Why?

EV: Yunnan, for natural beauty, colors, extreme cultural variations, food, and tea. You can spend days cruising chilly mountaintop villages above endless rice terraces with the Yi and Hani, and the next day drop into the Dai valleys full of pineapples, coconuts, and wooden stilt homes. As long as you stay off the tourist trail, there’s no end to the surprises.

WCT: What is one piece of advice you would give to travelers who want to experience the ‘real’ side of China?

Photo credit: Portrait of an LBX

Read more of Andy and Evan’s reflections and trip accounts at Portrait of an LBX.