Who needs a time machine when you’ve got frogs?

Secrets of the development of the Himalayas and the Tibetan Plateau have recently been revealed to us by Popeye-forearmed frogs whose evolutional divergences coincide with major tectonic events connected with the raising of the “roof of the world”. 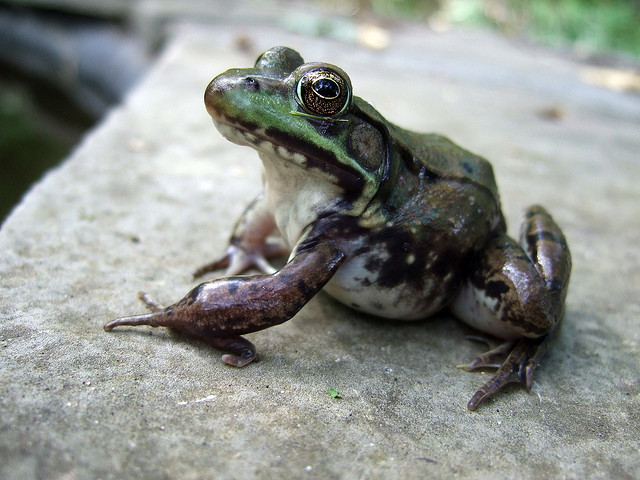 Scientists from the University of California, Berkeley and Kunming studied 24 different groups of the tribe Paini, gaining new insights into the collision of India and Asia, which led to the formation of spectacular peaks of the Himalayas and the breathtaking landscapes of the Tibetan Plateau. MSNBC reports:

“Geologists know a lot about that area, but what they haven’t been able to do is give a sequence to the timing of the rise of particular mountain masses and particular ridges and pieces,” David Wake, a herpetologist and evolutionary biologist at the University of California, Berkeley and a co-author of a new paper detailing the findings, said in a UC Berkeley statement.

“We use these frogsas a surrogate for a time machine.”

The rather unique frogs live in fast-flowing streams, requiring the male frogs to have strong forelimbs and coarse chests so that slippery females don’t get swept away by swift currents during mating.

The team of scientists found that the Paini originated in the Indochina region of Southeast Asia before moving into western China 27 million years ago, when a divergence occurred creating two new groups of frogs: the lowland Quasipaa frogs of South China and Southeast Asia and their high-altitude cousins, Nanorana in Tibet.

The Quasipaa frogs diverged into South China and Southeast Asian groups with the raising of the Truong Son mountain range on the border between Laos and Vietnam. But the real action was taking place in Tibet roughly nine million years ago, where the Nanorana subgenus was adapting to cold, dry and oxygen-poor conditions. A third group of spiny frogs was also isolated on the Himalayas 19 million years ago as the Tibetan Plateau pushed higher.

As tectonic events separated the frogs, each group evolved different features from other groups, becoming less and less alike.

The story of these frogs illustrates the inseparable relationship between geographical diversity and biodiversity. As Asia’s surface transformed, so did its animal and plant life. This variety of topography, flora and fauna in Tibet, as well as Yunnan and Sichuan, is one of the main reasons that this part of China is where several of AsiaTravel’s most popular tours take place.

AsiaTravel’s Family Adventures in Tibet and Soul of Tibet tours offer unforgettable experiences in this land of diversity. If the roof of the world is a little too high for your tastes, you can always explore the incredibly biodiverse foothills of the Himalayas through our South of the Clouds.