Below is a tale from this journey…

Sun (neema in Tibetan) blasts into the day as we wake to a reckless blue sky and a wind that hums. Snow capped peaks shimmer on the horizon and wind whips smoke and sand into mini-tornadoes. 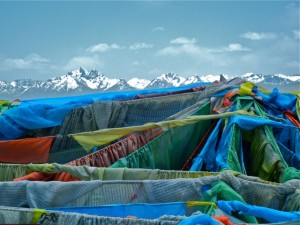 All of Mother Nature’s elements are on display today in a show of force, and Michael and I both feel this bodes well for the journey. The city of Maqen (3700 metres) scatters for cover from winds that rip down the main street daring any to test it. Eyes burn from the suns rays and all of the goodies that the wind picks up and throws.

Much of expeditions or indeed any travel, involves waiting. Waiting for weather, for the right guides, for the correct directions…in this case we are waiting for word of our team, one member in particular, who can add a rare perspective on our journey.

One of my great desires is finally confirmed beyond a doubt today as we are greeted with the welcome news that one of the last of the Salt Road traders will in fact travel with us as our unofficial guide. Up until now this has been a slight question mark because of his health and age, but his desire has and is strong to accompany us. In his seventies, he and he alone, it seems, knows the ancient Salt Road portion that passes through the nomadic lands and that which we seek to travel. There is only one condition to him joining us and that is that he has a horse to ride during the journey. In his almost apologetic words, “my body, though once strong, is no longer capable of walking the route”. We are delighted as much of the younger generation has no idea of the Tsalam (Salt Road), and sadly seem to care less, and with him we are sure to get tidbits, tales and that crucial must, an innate knowledge gained from actually travelling the route.

Today I am also issued another warning about wolves. “They are out in great numbers in recent years, and they are far smarter than you”, a local tells me directly. I’ve no doubt about his information, as years back in this region I was to witness a site that remains in my memory bank still. Trekking through a remote portion near Golok, a friend and I watched a pack numbering almost two-dozen strong, rip into a flock of sheep with an efficient ferocity that was riveting. The act that unfolded was both brutal and impressive in both strategy and execution.

Michael and I are urged in the bright rays of the sun this morning to visit the local monastery, which sits as a tribute to another traveler: a monk who traipsed all over the Tibetan Plateau by foot with little more than a bag of tsampa (ground barley), some butter and a bit of tea (which of course set him high in my books). 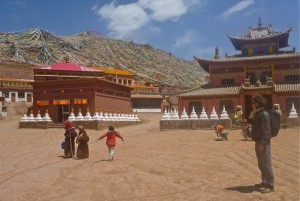 We are told that to begin our journey through these stoic and staggering landscapes we should visit and appease the local deities and pay a gentle homage to the lands and beliefs that we now find ourselves. I’ve long felt that these little gestures set something in the mind at peace, a kind of genuflection of respect to local forces, however secular or otherworldly they might be.

The monastery is more a series of small monasteries sitting at the north end of town, stupas, and flat-topped homes. All of this surrounds a huge mound of dirt hectares in size, which still now, is only now rediscovering life after a brutal winter. Prayer flags (loong da) cover the entire northwest face, flapping and billowing in winds that gain strength the higher we ascend.