Jingdezhen was the world’s undisputed capital of porcelain for nearly 2,000 years, yet it lay forgotten until the late twentieth century. Now, thanks to redevelopments and a new generation of artists, new life is being breathed into the very place that gave China its name.

Jingdezhen rose to prominence during the Han Dynasty (221–206 BC), crafting fine porcelain ware for China’s emperor and imperial court. Despite their efforts to keep the place secret, fine porcelain found its way onto the Silk Road, and became treasured across the world – at one point, fine china was valued over gold.

In the last decade, Jingdezhen has risen from the ashes, with renewed interest and increasing numbers of artisans learning the fine craft of porcelain making. These include American ceramic artist Ryan LaBar, who has set up a workshop in Taoxichuan, a bustling arts community at the heart of Jingdezhen’s rebirth. Ryan LaBar is a Pékin Fine Arts represented artist. 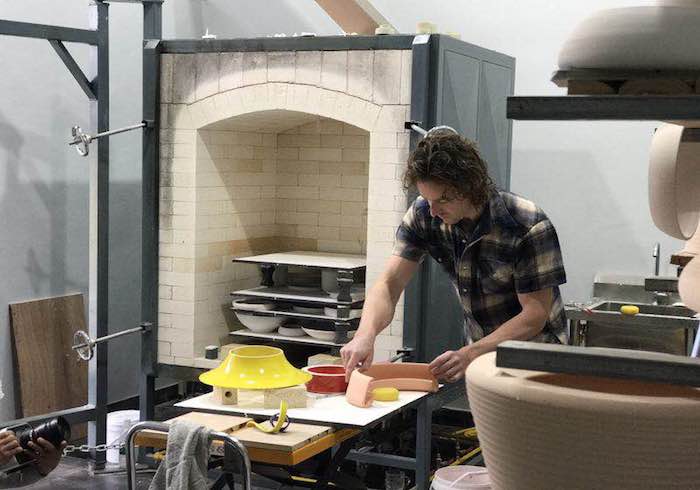 Ryan gave us the lowdown on his work and the city’s contemporary arts scene.

Could you tell us about yourself and your work?

I came here in October 2015, as Taoxichuan was being built and I was invited to work at the International Studio. I then saw the scope of the project, as it was developing for the two months that I was initially here for. I decided to build a studio here because the project was really strong, and the cost of living in Jingdezhen is incredibly cheap compared to Portland, Oregon where I was coming from.

I went to school as an undergraduate to be a doctor, but I realized that wasn’t my passion. So I set out redefine myself by doing something that I truly liked: throwing pots. I slowly developed my work through a series of investigations, experiments and failures.

My work comes from a somewhat reductionist way of thinking, which is a way that many biologists look at the world, as they look at the complex systems they break them down into understandable parts. So my work is somewhat like that, I create seemingly complex pieces of work that I consider compositions, more like structural compositions. They’re based on putting small parts together to create a whole. 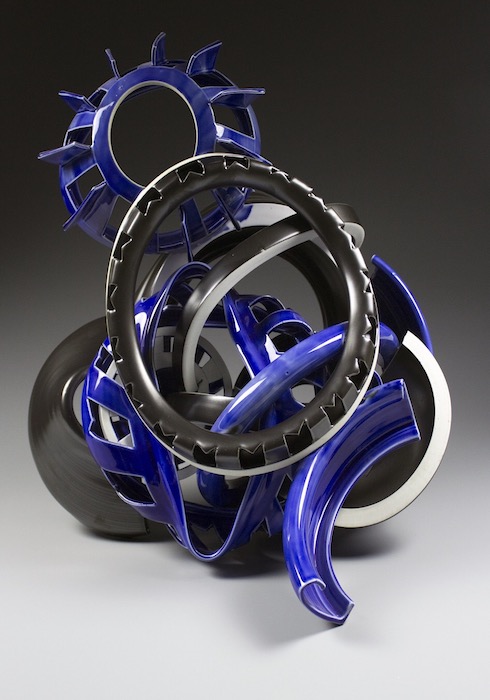 What drew you to Jingdezhen?

Part of the reason I’m here is to create a new dialog and open up a fresh perspective in the international ceramics scene. I’m coming to Jingdezhen to show what is possible using traditional materials and techniques, within the mother city of tradition and porcelain; I’m being met with open arms. People are excited to see new work and potential.

Everyone within the field of ceramics knows that China was named after the fine china that was created in Jingdezhen. So I feel like a son returning home to his mother. The history of china and porcelain is very important to me. It attracted me to Jingdezhen, to feel the history, and I’m very much attracted to places that have a creative energy. I consider Taoxichuan a dry riverbed that now water is flowing through again. I feel that energy and flow, and that inspires me everyday at work. So Jingdezhen from a historical perspective and the creative potential that exists, and the fact that it’s economically feasible, all of that drove me here.

As a foreign artist, how do you incorporate Jingdezhen into your work?

I’m working on west meets east, so I’m taking these traditional Chinese vases, that are kind of tchotchke (kitschy souvenirs), so they look like old vases from the Ming Dynasty era, but they’re slip casted and manufactured in quantity, and are very cheap, like 30RMB. I use that as one of the elements in the sculpture, and so my sculpture is wrapping around this old Chinese object that represents the history of ceramics and where it’s come to in the modern time. My work is literally strangling it, embracing it, or just melting and working with it. 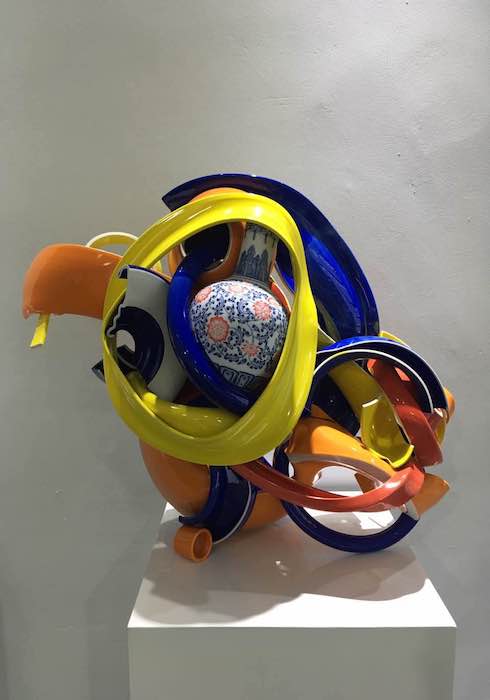 How has Jingdezhen’s history as the porcelain capital of China impacted the contemporary art scene?

That’s an investigation that I’ll be pursuing forty years from now. I don’t think there is very much contemporary art here. But there’s always a sense of marketability here that’s getting in the way of progressive, contemporary ideas. People keep asking me “How can you make this work here?” because no one sees this of value. Their value structure is based on centuries of tradition, which is the quality of glaze.

I haven’t really been moved by contemporary art here, and I hope to be part of creating a contemporary dialog in Jingdezhen. I’m also aware that in order to attract people that are interested in porcelain you have to adhere to some of those traditional value structures. I still value that sort of pristine glaze surface, the technicality of throwing and stuff like that. So for me to use that familiar tchotchke vase, that Ming Dynasty rip-off presents something familiar, and traditional. I think that that is to recognize the existing language and then bring your own language into it, somehow reconciling the two.

I wouldn’t be here if there wasn’t potential for revitalization. I think that the market for contemporary ceramic ware embracing the dialog of traditional ware, has an opportunity here.

How can you see the local scene evolving?

Jingdezhen is a very special place. Right now there is so much outside interest, and the government is helping create all these building projects. They’re putting a lot of attention into Jingdezhen because of its history and China’s namesake is in this city.

Jingdezhen’s getting a facelift, and a lot of people are aware of it. It seems like Jingdezhen is attracting a lot of outside money, and I’m witnessing it, being at the heart of this huge project at Taoxichuan, that I think is at the pinnacle of Jingdezhen’s revitalization. The level of quality that’s gone into this factory area is unlike anything I’ve ever seen, it’s done well. If this is the standard for projects in Jingdezhen then I can’t imagine what Jingdezhen will be like in ten years’ time.

What does the future hold for you?

It depends on what I love doing, which is to sit down at the potter’s wheel. My studio practice is my main drive, and so hopefully I can continue doing this. The more that I can use these projects to populate a dialog, the better. I also show my work in Beijing, Shanghai and Hong Kong, and do talks and workshops around East Asia.

I hope that as I continue my practice, I get more interested parties, and projects that will push me beyond my comfort zone. That will push my work to areas that are beyond what I can think of right now. 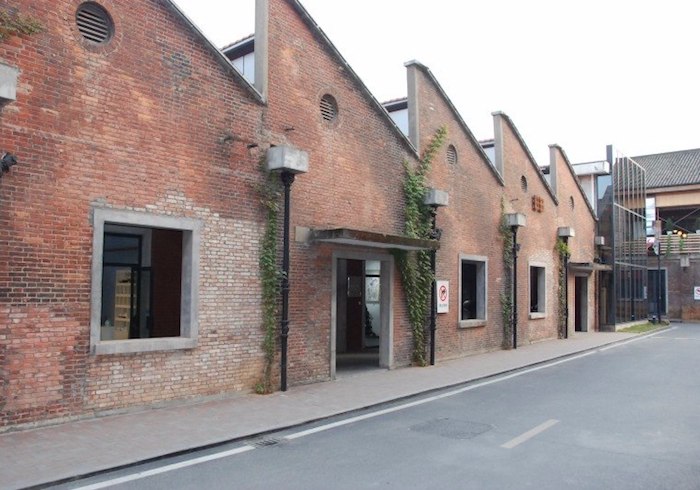 Why would you recommend that people visit Jingdezhen?

To me in Jingdezhen there is a place that’s more “China” than the larger cities. It’s like backcountry China. So as far as attracting tourists here, not only because of its ceramic history, there’s a real China here, and the landscape is beautiful. There’s Sanbao Valley here that’s exquisite, and you’re minutes away from beautiful scenery.

You’re steeped in this juxtaposition of old and new China, so I think it’s a really valuable time for people to visit Jingdezhen to see how it’s changing. Here in Taoxichuan they have strict rules about preservation, somehow keeping the integrity of the old, and to me this is a good sign of the value that’s being placed on the history of China and keeping the culture alive and memorable, but at the same time giving it new breath. So when I say it’s a dry riverbed, they’re not creating a new river, they’re just filling it back up with new water. The old riverbed and beaches are still there, the stratifications that the river has created throughout the years are still visible.

Watch skilled craftsmen sculpt, paint, and fire delicate porcelain wares once fit only for emperors on our Jingdezhen: the Art of Porcelain tour. You’ll also hike into the mountains that once provided the precious clay for the workshops and visit Tao Xi Chuan District yourself.