The region around the city of Guilin, in Guangxi Province, is chock full of beautiful scenery, things to do, and rare treats to eat. In fact, the area is becoming increasingly popular with tourists and you might be hard-pressed to find a slice of authentic China.

That’s where we come in. On a Guilin tour with AsiaTravel, you’ll be whisked out of the city and away from the cookie cutter itinerary to take part in special, exclusive, and life-changing experiences.

What wonders await you on a Guilin tour like Guilin: Into the Scroll? Here are some of the highlights:

What to See Around Guilin 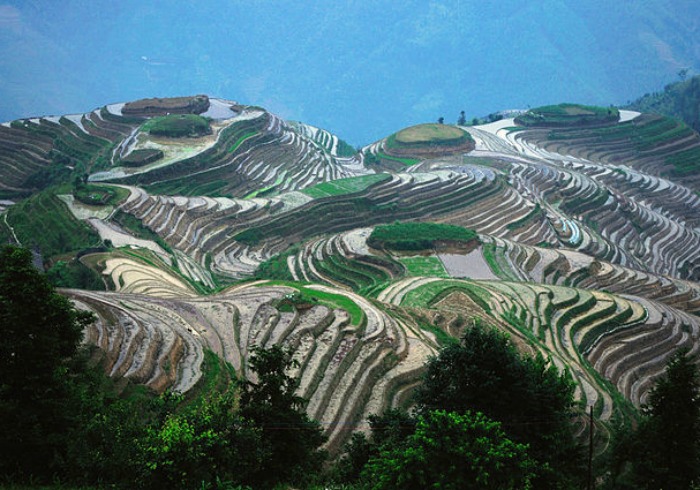 The mesmerizing manmade tiers of the Dragon’s Backbone Rice Terraces undulate across the landscape a short way’s drive from Guilin. These classically Chinese terraces were built over 700 years ago and took about 400 years to complete.

On a AsiaTravel Guilin tour, you can witness the wisdom and ingenuity of the Zhuang minority people who’ve made these terraces home for centuries. We love to guide you at your own pace on a hike along the landscape and while you take in the luscious natural scenery, you’ll also get to know the ethnic minority people you meet along the way. 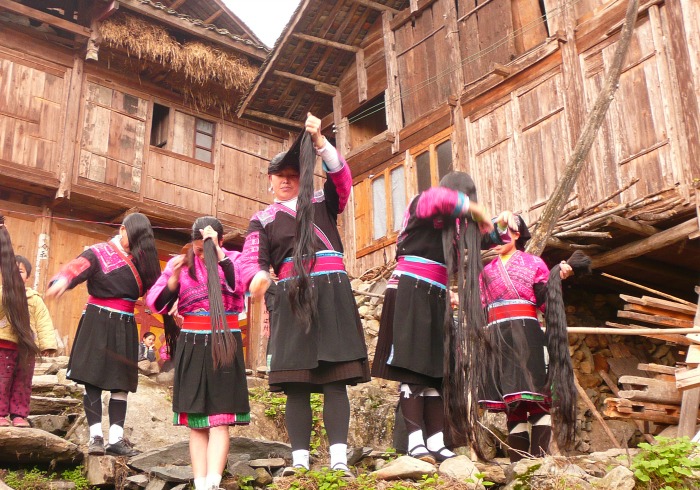 In the remote village of Xiaozhai, the Yao ethnic minority people maintain their traditional ways of life. The Yao are widely known for their brightly colored textiles and their musical traditions. You may watch as artisanal crafts are taught to the local children or witness groups of women singing and dancing together. Music is a key component of Yao religious ceremonies and storytelling, and you’ll witness this festive magic in the making.

With all the fun working up your appetite, AsiaTravel will arrange for you to visit a family’s home for an informal cooking demonstration and a lunch of typical Yao dishes.

The women of the village will also demonstrate their complicated “flower hair” hairstyles. Traditionally, Yao women only cut their hair once as teenagers and once after they marry. 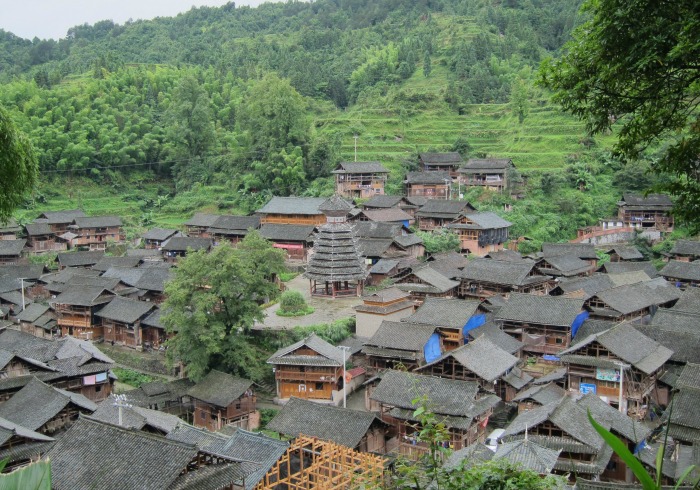 Another rare encounter you can have on a AsiaTravel Guilin tour is with the Dong ethnic minority people. From traditional architecture to intricate jewelry and textiles, the villages of the Dong people are well worth a stop over.

In the center of each village, the Dong have built a drum tower using pillars and supporting beams made out of fir tree logs. Mythical beasts such as dragons and phoenixes have been carved atop the pillars to symbolize good luck for the local people.

Where to Stay Around Guilin 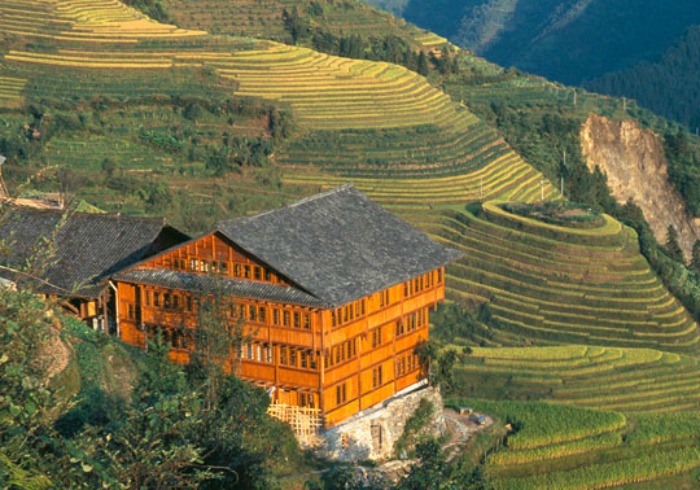 Li-An lodge is perfectly situated to make the most out of your Guilin tour and is one of our preferred partners for Guangxi Province. Overlooking the magnificent Dragon’s Backbone Rice Terraces, the lodge sits atop a mountain and borders a local ethnic minority village. Li’an lodge was built entirely of wood without using a single nail. The traditional Chinese technique of tongue and groove building was used to create this effect.

The lodge itself was created by Keren Su, a renowned photographer, painter and adventurous world traveler, who hoped to build a retreat where Chinese traditions meet modern luxury. Su built artistry into every detail of Li’an Lodge and nature returned the favor with the views. Year-round, the lodge witnesses the rice terraces change from verdant green, to snow-covered white, to shining yellow with the seasons.

What to Eat in Guilin 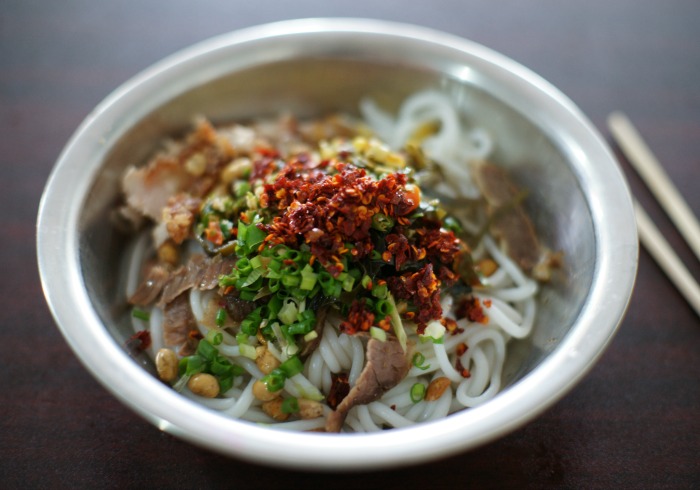 These noodles are beloved by locals and visitors alike. They are mild, fragrant, and inexpensive, coming round like spaghetti, or flat like ribbons. Accompanying the noodles are the delicious gravy, scallions, fried peanuts or soybeans, and finely sliced pieces of meat. Each chef has their own secret recipe, so the gravy will vary from shop to shop. Locals eat these noodles for any meal of the day. Throw a stone, and you’re likely to hit a rice noodle stand! On a AsiaTravel tour we’ll recommend our favorite rice noodle shop and can even arrange for you to hone your cooking skills in a private cooking lesson. 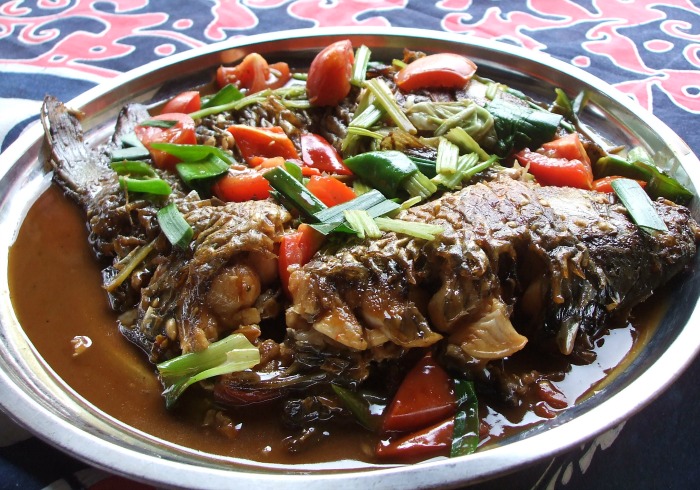 If you like fish, but not the smell, this dish is for you. This fish is locally caught and then fried in tea seed oil and braised in beer. There are three factors that make this dish really special: first, the carp must be between 1-1.5kg, and have been recently caught in a pristine location; second, it must be cooked in water from the Li River; third, the fish must be cut without scraping any of the scales. Be warned: beer fish is spicy but the flavor is well worth the burn. It is also best enjoyed in the home of a local fisherman. AsiaTravel can arrange this intimate meal for you during your stay.

When considering the scenic locations of China, a Guilin tour should be high on your list of options. The experiences we’ve mentioned above is just a sample of what you will discover. Customize our Essence of China tour to enjoy Guilin as part of a longer China journey or, if you are looking for a shorter trip, check out our Guilin: Into the Scroll tour.