———-
We are hunting a ghost, ghosts in fact it seems. The Salt Route that hasn’t been documented, this Tsalam that I have dreamt about and that we now seek is becoming akin to chasing vapours, or trying to track windblown sand. My western notion of a ‘route’, the idea of one single ‘route’ being the Salt Road has been annihilated. I should have known better than to assume any one path, road or route can be omnipotent upon the mighty Tibetan Plateau. The essence (which I’ve temporarily lost sight of) of a “route”, especially a trade route through these motionless and giant spaces is made up of many various paths that join, stretch and then veer off from one another. A route here at least, is the sum of its parts, and its parts are fragmented trails, not a single path. A route may have a name but it inevitably has many feeders that contribute – and the route of salt is true to this.
Lower Honkor is a dozen kilometers from the fractious Sichuan border with Qinghai and Michael and I are welcomed by a friendly but wary contingent of border police. Michael and I are both wearing the faces of slightly weary but expectant travelers, who have finally arrived to their long dreamt of paradise. This ‘paradise’ we arrive to is a series of ill-kept row houses, a school compound and a block of buildings that are surrounded by newly built wall. All of this seems shoved into a windblown valley along the Nyi Chu (Nyi River) with a single road adhering it together.
We are told gently that no, we cannot dither about indefinitely asking the elders about salt, and no we cannot trek because of ‘dangers’ – though what dangers we would be likely to encounter, no one elaborates on. 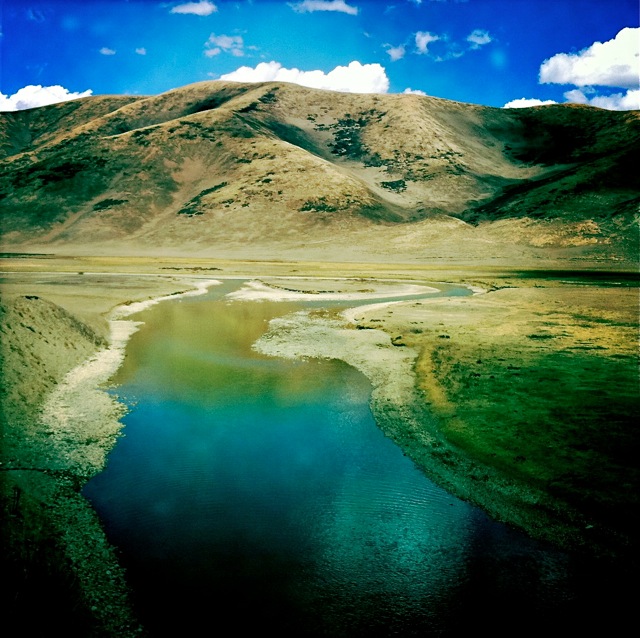 The Nyi Chu river provided a valley ‘trail’ by which salt caravans, single yak, and nomads accessed the salt sources of Qinghai

Our moods collectively darken, as at this point we need direct communication not promises and smiles that fade with light. My tea consumption (a consistent antidote to all things stressing) has increased to where I’ve got my thermos filled and by my side at all hours. I’ve got a twitch in my left eye jumping around – there is frustration at this point; one of any ‘exploration’s’ less talked about inevitabilities. We’ve been pointed in directions, gotten whiffs of the salt, the route, felt we’re close only to have the door (which has been permanently ajar, but not open) swing shut on us. The hints, though, are enough.

But then, unexpectedly for reasons that don’t matter but do confuse, we are offered information by locals that yes, salt came through this valley, but never in large amounts and certainly not in caravans, but rather, in groups of two’s and three’s. Yes, salt came in but not from the south as I had imagined, but rather from further west. Families, or simply family members would depart and be back within a week or ten days with a yak or two laden with salt from Sichuan, or this new western locale that is emphasized.

“So should we head to Sichuan’s salt sources”? We ask.

“Mado”, this name comes out at us from nowhere.

“Mado is where you must go to explore the real salt history. It is there that the best salt on the plateau exited”. There are salt and brine wells and salt lakes throughout the Himalayas and upon the Tibetan Plateau, but these are largely mere blips, or well-documented sources. It is the existence of the sources in the nomadic areas that beckon me on – the less documented and ‘hidden’ from view salt centres that we are hunting…and of course those few bodies and minds that still carry their own remnants of tales from the ancient days of trade.

Some would call these wastelands, vast spaces of emptiness that can host only the most rugged life forms…from my heavy eyes; I see that this is as a place of great and silent power that cannot be bent by human hands. These bleak and stunning landscapes measure risk and beauty differently and the ‘reward’ for mistakes or failure here is harsh and often fatal.

Vast and empty – valleys at 4,000 metres near Mado

We are heading west to Mado and the famed salt lake awaits us (we think). Mado County rests at 4,300 metres and it is known for being one of the coldest counties of all of the Tibetan regions. It is called Marduk to the Tibetans meaning, “high place” and it is that, though the ‘town’ itself was more of a nomadic seasonal dwelling place wedged into a long lake shaped valley.