Deep in the heart of Southern Yunnan there exist tea trees unlike any other on Earth. The jungles of Xishuangbanna Dai Autonomous Prefecture and the districts of Simao and Lincang are home to the oldest tea trees in the world. In these regions grow tea trees that range in age from several centuries to over a millennium, and the tea that is made from their leaves is called Pu’er.

Over the past 30 to 50 years, however, the number of these ancient trees has steadily decreased. Since China’s reform and opening up policies were implemented in 1978, the Chinese tea industry has grown rapidly.

In early 2001, the Pu’er market took off. Large corporations moved in and producers and retailers proliferated. Before long, demand couldn’t keep up with supply. Prices inflated and hype ran its wild course. In 2007, the bubble burst and the market crashed, sending many businesses into bankruptcy. Since then, the market has steadied, but the unsustainable industrial approach to agriculture that was initiated during the market’s quick expansion has continued.

With increased demand for Pu’er tea, the industry changed course from quality to quantity. Today, the majority of large corporate players that have a strong-hold on the Pu’er market only produce plantation tea, which is cultivated in monocultures sustained by the use of agricultural chemicals that erode the land, lessen the quality of tea leaves, and sometimes poison people.
Large areas of forest are now being cut away for high yielding tea plantations, and according to one farmer, “Plantation tea in Xishuanbanna didn’t exist until after 1978.”

Nonetheless, many century-old, big leaf tea trees still exist (there are two primary species of tea trees: small leaf and big leaf). These trees have lived for hundreds, some for thousands of years in rich, bio-diverse environments. Now, these trees and environments are nearing a state of endangerment. 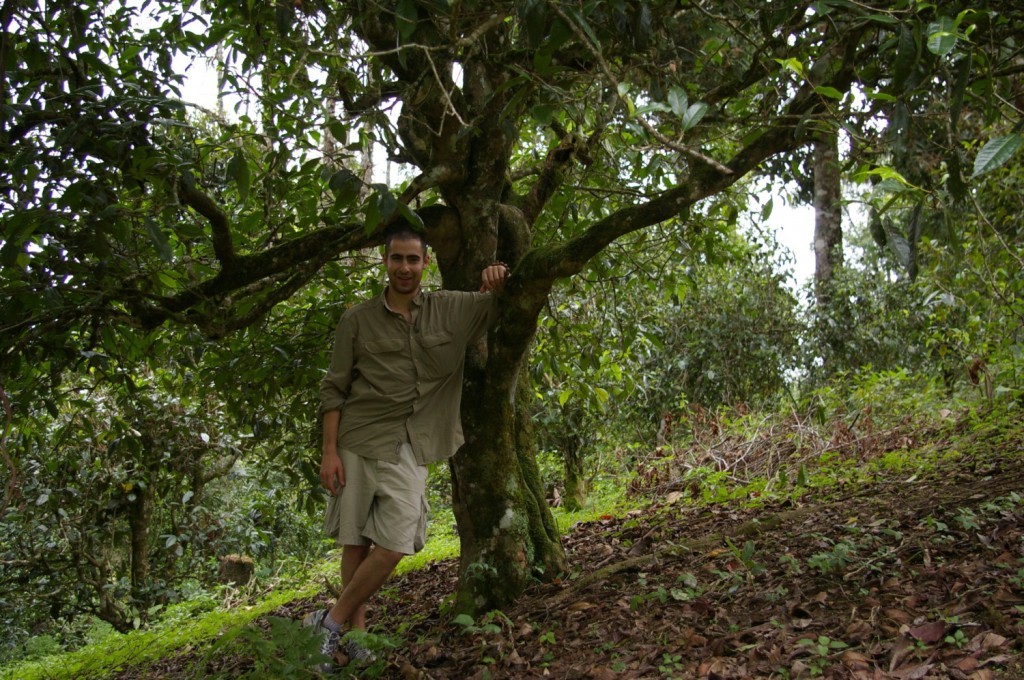 Along my travels, I encountered herbicide bottles scattered throughout ancient tea gardens. Herbicides are used to make these gardens look prettier and keep “weeds” away, but they harden the ground and destroy biodiversity. When the surrounding foliage is killed off and the environment is no longer diverse, insects then further target the tea trees. Once the insects begin heavily attacking the tea trees, pesticides are generally the next step. Before long, a once-thriving, bio-diverse environment becomes not too much different from the plantation tea growing on adjacent mountain sides.

When I did find environments that were chemical free, I often came across other disturbing signs of environmental destruction. Many trees are simply over-cultivated. One farmer told me that he harvests his 500 year-old tea trees twice a month for nine months out of the year. When I tasted his tea, it was very weak in flavor and energy compared to teas that don’t come from over-cultivated trees. The same farmer showed me a tree of his that was over 800 years old.

“How often do you harvest this tree?” I asked.
“Once a year,” he replied. “It harvests two kilograms.”

I found it odd that he’d only harvests his prized tree once a year, but his other ancient tea trees he over-harvests. As a result, many of his 500 to 600 year-old trees were showing signs of illness.

In order to increase production, cultivators have begun chopping ancient tea trees in half. By doing so, the tree sprouts more branches and more leaves, allowing the farmer to harvest more tea and earn a higher income. The problem is that chopping a tree in half is not healthy for it, and so this practice is leading to the illness and death of many ancient tea trees.

Saddened by what I saw, I unfortunately did not find any signs of formal protection for the last of the world’s ancient tea trees. With a lack of regulation and a strong emphasis on money, the very trees that filled many farmers and producers’ pockets are being destroyed for the sake of filling them further.

Andrew Stein founded and runs Project Releaf. Funded by a J William Fulbright Research Grant, Andrew takes us on a journey through some of China’s most remote and ancient tea localities. Seeking to better understand the balance between China’s massive economic growth and its rapid environmental deterioration, he analyzes these effects of China’s swift modernization through the lens of China’s deeply-rooted tea industry.