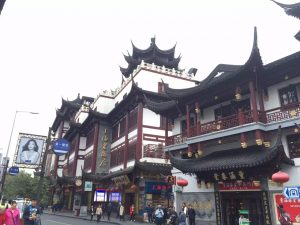 Shanghai’s birthplace – Shanghai Old Street, is not very long, and the end of the street is the City God Temple. It is hard to imagine that Shanghai, an international metropolis, has developed here. There is still a distance between Suzhou and Huangpu River.

The Shanghai Old Street now looks like the street in the small County. It is very old, but there are some old shops there. “Wanyouquan”, which is a very famous shop on the Shanghai Old Street, offers the ham, bacon, sausage and so on, and they are very good and very delicious. The “LaoDaFang” is also an old shop. The residents on the street still keep old habits. The quilt and clothes are basking on the bamboo poles outside the window. The phenomenon of the Bund in the past is called the “WanGuoQi.” There are also some incense sticks, etc., but most of them are opened later. It used to be closed the “PoSiJiu” for a while. This is the western section of Shanghai Old Street. There is also an archway at the western end. It is more stylish than that of in the east. This section is more about handicrafts and collectibles, such as jade beeswax bracelets, etc. Of course, there are also noodle stores, clothing stores, etc. after you go to the west, you need go back a small section of the road, because going to the City God Temple need go in from the small alley that just passed. The scenery seen at this time is a contrast, as it is classical and modern coexistence. From the small alley, you can go to the core area of the City God Temple. There are quite a few local specialty shops here. 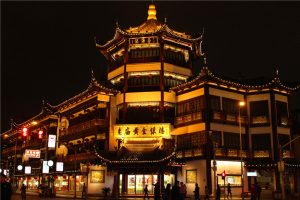