While Helen of Troy was the face that launched a thousand ships, pu’er tea was the beverage that paved the ancient Tea Horse Road. Fifteen hundred years ago, pu’er was a humble tea that rarely left the confines of Yunnan. But, sometime around the 7th century, something changed.

The Origins of Pu’er

Some say that merchants first learned of the tea when the ancient Tibetan Kingdom of Tubo controlled much of what is now Yunnan. Others say it was the union of the Tang Dynasty’s Princess Wencheng and Tibetan King Songtsän Gampo that led to its introduction. One thing is certain: the leaves that were once being enjoyed only by the ethnic minority groups that tended to them had found their way into the cups of emperors in northern China and Tibetans on the Himalayan Plateau. Soon enough, the thirst for pu’er was so unquenchable that an entire network was developed to carry the leaves out of the province and over the mountains, trading bricks of tea for Tibetan warhorses, precious silver, and salt. 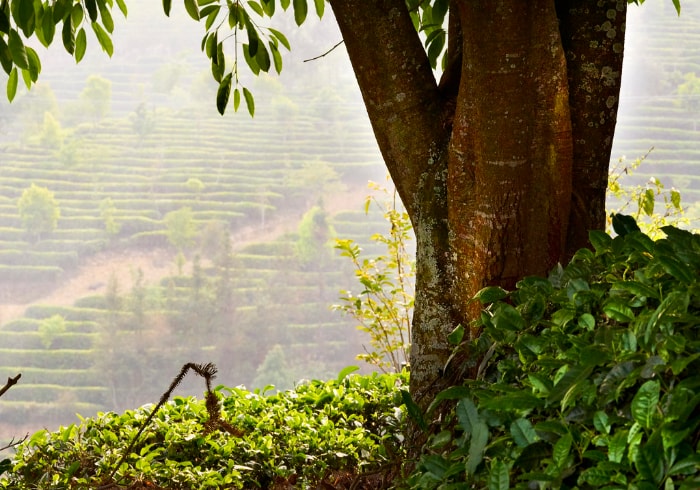 “Under a shade tree – tea mountain Pu’er, Yunnan, China” by BryonLippincott is licensed under CC BY-ND 2.0

RELATED READING: The Top 5 Things You Need to Know about Pu’er Tea

The roots of pu’er can be found in southwestern Yunnan, near the subtropical Eden of Xishuangbanna. In the heart of the Tea Belt – an area that extends from Assam in India to northern Vietnam – the home of pu’er is no less than the crux of the species. Hidden high in the region’s misty mountains, ancient tea trees – some of which are over 1,200 years old – have been cultivated by hill minorities like the Dai and Aini for over a millennium. Using knowledge that has been passed down through generations, farmers trek through remote jungles to reach clandestine groves. There, they tend to both wild-growing and specifically planted trees before handpicking the large, soft leaves and beginning the painstaking production process which is closer to an art than a science.

Named for the town that served as the collection and trading hub for the area’s tea mountains, pu’er has many related spellings (among them pu’er, pu-erh, pu erh, puerh, pu-er, pu er, and puer). Although the legendary tea is known by many names, there are just three criteria that must be met in order for a tea to be given the coveted title of pu’er. First, leaves must be picked from a broad-leaf tea tree (generally Camelia sinensis var. assamica, for all the tea connoisseurs out there). Second, like Champagne and its namesake region in France, production must occur in Yunnan. Finally, the leaves must be dried in the sun (not in an oven – that’s cheating). After being picked, the incredibly precise production process begins. Leaves are laid out to wilt for a few hours in the sun. Then, they are quickly fired in a wok over a gentle wood-burning fire to ‘kill the green’ (known as sha qing in Chinese) and stop oxidation. However, the farmers must watch the leaves carefully. Heating them too long takes away all moisture and kills the natural bacteria which are vital to the fermentation and aging of the pu’er. After the firing, leaves are rolled, shaped, and spread out to dry again in the Yunnan sunshine and initiate post-fermentation. It’s here in this last step where the magic alchemy of pu’er tea occurs. 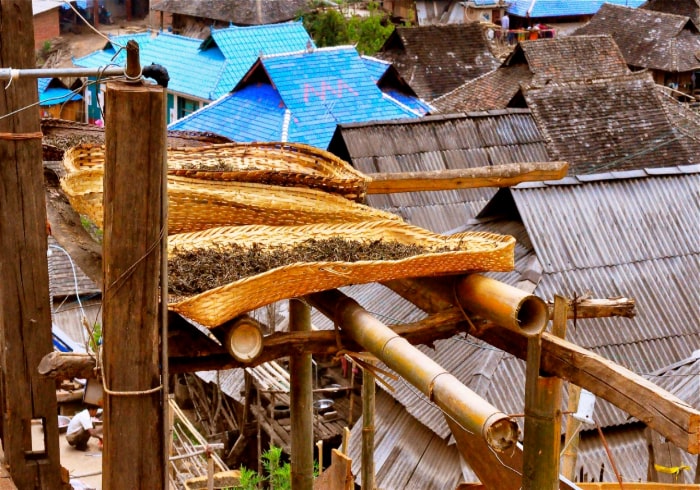 “Dry the tea” by Jeff Fuchs

The invention of pu’er as we know it today is something that can only be described as culinary magic, a result of happenstance and fluke conditions, which takes us back to the ancient trade network known as the Tea Horse Road. To accommodate the insatiable thirst for tea of Tibetans and the imperial class, caravans of merchants would compress the tea leaves into bricks, wrap them in bamboo, and then strap them to the backs of horses, mules, and other pack animals to make them easier to carry. Long distances and rough terrain meant that the tea could be traveling for months, or even years, before finally reaching its destination.

But, during the journey, something happened – the pu’er changed. In an act that can only be described as gastronomic serendipity, the tea’s exposure to sweat, the elements, and shifting climates not only changed its color from green to earthen teak, but the flavor became richer, smoother, and fruitier. Like a fine merlot, aging and a natural fermentation process while traveling caused the tea to evolve into something not only uniquely delicious but also medicinal and highly sought-after.

Over the years, the desire for pu’er mellowed somewhat, its drinkers largely confined to Yunnan. Until again, starting in the late 1990s, something happened. Investors from first-tier cities in China and then the rest of the world began streaming in. Tea that had once sold for pennies a kilo skyrocketed to hundreds of dollars by the mid-2000s. While the bubble burst temporarily in 2007 and sent prices plummeting, it is on the rise once more, with 350g discs aged 70 years ringing in at thousands of dollars, and there are no signs of stopping. Pu’er, once a humble tea of Yunnan, is again the Helen of Troy of tea. 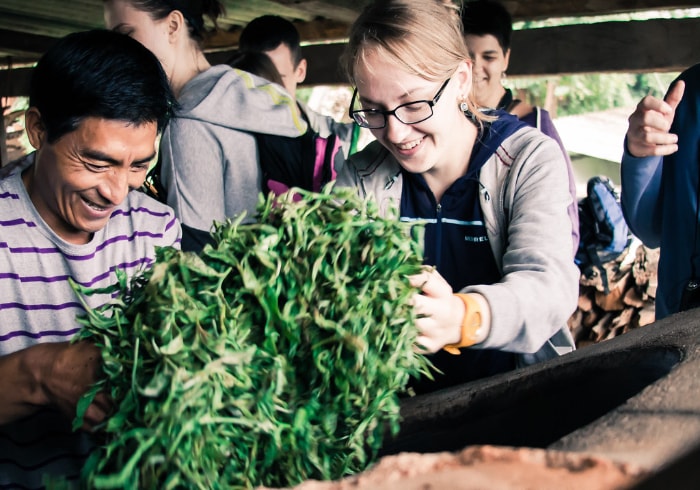 In spite of the demand and the temptation to cut corners, Yunnan’s hill minorities carry on the tradition of pu’er set forth by their ancestors generations ago. Tending to the trees with the skill and dedication of a vigneron nurturing their vines, many farmers devote their whole lives to fashioning the perfect cup of tea.

To delve into the past and present of this precious commodity, contact us now to learn more about our upcoming journey back to pu’er’s roots with Jeff Fuchs and Traversing the Ancient Tea Horse Road. After hiking to the ancient tea tree forests, you’ll sit down with the descendants of the first tea cultivators for a pot of tea and a memory that is literally millennia in the making. We hope you’ll join us for a cup of tea.