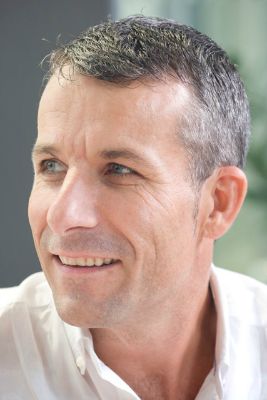 Over the weekend, The Opposite House played host to AsiaTravel’s inaugural Beshan Gāi bazaar, where artisans converged from around the country to showcase the finest of artisan China. In the lead-up to the event, we met with The Opposite House’s chief host, Area General Manager for Swire Hotels Peter Wynne, to talk art, food, Beijing and strangely…pearl diving.

Let’s start by talking about The Opposite House. What was the inspiration behind the architectural design? It is not your usual, run of the mill hotel.

It was built at a time, before the 2008 Olympics, when hotels were opening all the time and they all looked the same. The architecture was designed by Japanese architect Kengo Kuma and his brief was to design something different, unlike any other hotel.

There are so many elements to The Opposite House. It’s a glass jewelry box that opens up into beautifully designed compartmental rooms. The spaces are engaging and intriguing, aesthetically pleasing but not cliché.

The decor is timeless and not too ‘modern’ that it will become obsolete in a few years. And there are also many Chinese elements that are very much part of the architectural design. I think the idea to use both wood and plexiglass for the medicine drawers was ingenious. 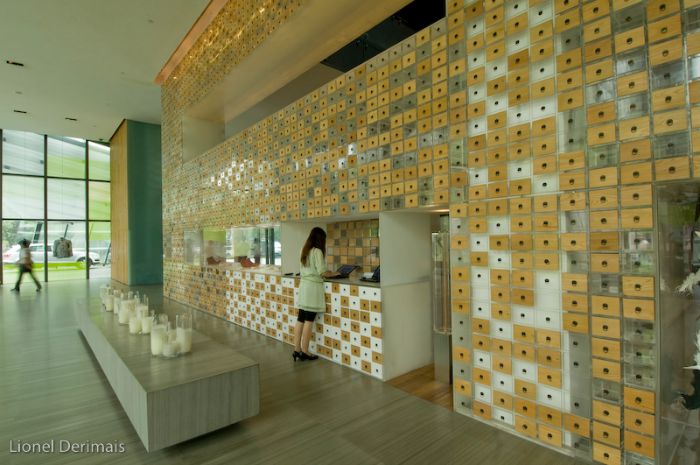 What is your favorite space in the hotel?

I like them all but I guess the swimming pool is one of my favorite spaces. Shards of light come down through the building to the pool. It’s actually part of the architectural scheme that sunlight lights up the swimming pool even though it’s in the basement. When you stand on the top floor and look down you can see all the way to the pool in the basement. You look down 8 or 9 stories and it’s a masterpiece – Not that I get the chance to go in there very often. 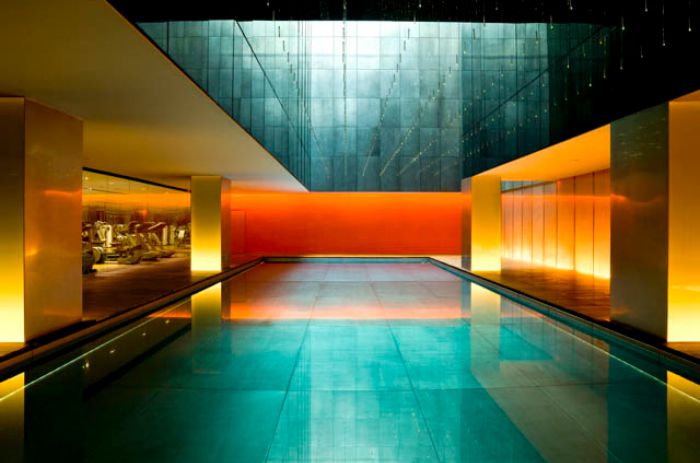 Swimming pool with natural light from above. Photo credit: nicelymadeinchina.com

Why do many high profile guests choose to stay at The Opposite House rather than the many other 5 star hotels in the area?

The hotel has its own personality and that personality comes from the people that live and breathe the hotel – from the staff in the restaurants to the people who greet you at front desk.

We’re very clear about our people philosophy – we always pick people for their particular personality and the things that make them tick rather than their qualifications and work experience. Personality shines through and gets into the wider market place and that’s what these kinds of celebrities really want.

We are also always striving to keep it current. We always have new ideas and propositions and try to make it fun. It’s got to be fun for the customers but also fun for someone who works here. You have to get up in the morning and look forward to coming to work – even if it is Monday!

The Opposite House is well known for going the extra mile and paying attention to the small details. Can you think of a particular example of this?

There are lots of little tricks. I think one good example is when you normally register at a hotel in China you have to fill in a registration form and then you have to hand your passport over to be scanned. It’s a long, laborious task. What we did in the early days was we had an iPad with a camera so the check in process was made so much easier. 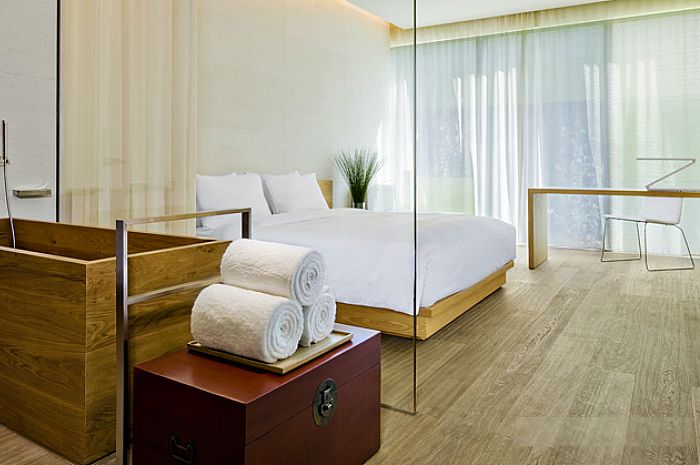 There are other details too. Our mini bar is all complimentary. Why hotels would want to charge $5 for a coke is beyond me. The actual base cost of a can of coke is very low but the goodwill you get from it is almost priceless. The same with wifi. We have the highest possible speed, complimentary for guests because that’s what the modern traveler wants. Charging for slow internet is an easy way to annoy customers and ensure that they don’t come back.

Where do you source the art pieces that define The Opposite House?

Some of the permanent pieces have been here since we first opened. We worked with a number of art consultants who purchased art for the hotel. They did a great job because this was pre-2008 and they managed to find a number of pieces that have become synonymous with The Opposite House.

We also do a quarterly installation that can be found in the foyer and the criteria for these installations are very simple – they are all contemporary Chinese art. We are a contemporary hotel, in China so those are the only two limitations. We have been approached by overseas artists and galleries and although we will always entertain ideas, we wish to keep the space for the local art community.

We’ve done video art, sculpture, and installation art. We are not limited to any one gallery or curator. We work with a number of people who know the art scene very well (much better than we do). Our current installation is one of the edgier that we have featured. 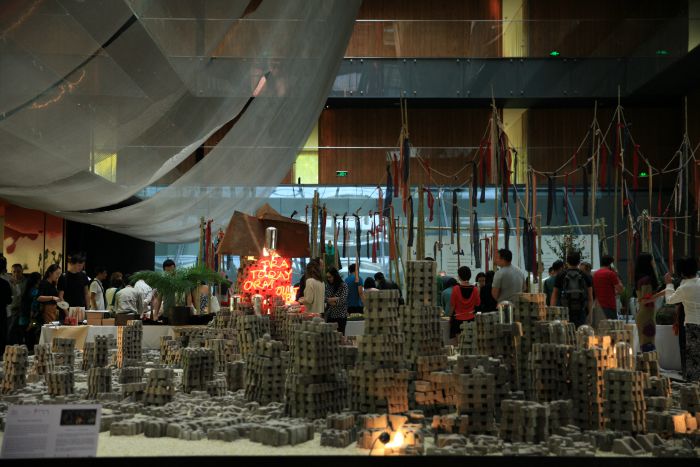 TOH’s latest exhibit, with AsiaTravel Beshan Gāi as the backdrop

How do you think the art installations affect the stay of the guests?

I think it has really been part of our branding. People have grown up in past 8 years with The Opposite House knowing that every time they come back there will be something else to engage them. A whole new visual engagement to have and that’s our DNA.

It happened almost by accident actually. Where those installations are, in the original design are meant to be reflecting ponds. Waterproofing wasn’t great in 2007/2008 so they didn’t hold the water very well. Also, in a residential area where there are kids around they can be a liability – they didn’t work practically. So the idea was to level it out, put some art in its place and keep that revolving. People love it. 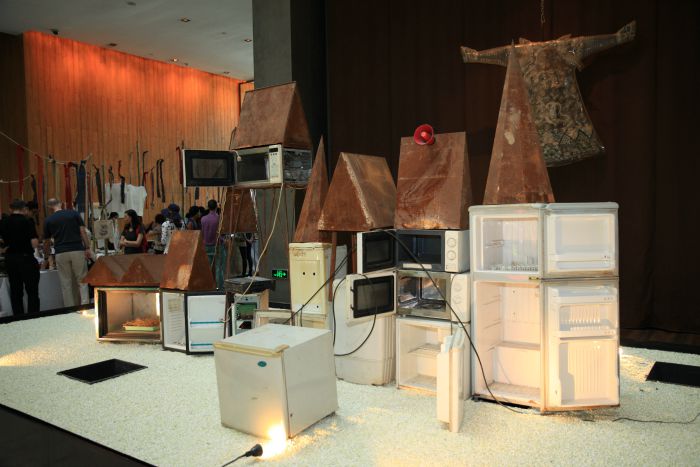 Can you tell us what brought you to Beijing and what keeps you here?

I’ve lived in some pretty remote places. I ran Necker Island for Richard Branson for a couple of years, I’ve worked in the Maldives and in lots of remote, beautiful, idyllic places. These places are perfect for a spending a 2-week honeymoon but it becomes a little more challenging to live there.

In 2004 I got the opportunity to come to Beijing. At the time it seemed like the toughest decision in the world to leave this idyllic island and go to a big city like Beijing, but it was for a hotel that was going to be the host hotel for the Olympics so I couldn’t really say no.

I really enjoy the changes throughout the year in Beijing. You have seasonality here. The city is very creative too and that is something that resonates with the hotel. There has been big progress in art but also technology, fashion and design.

We have a great family life here too. We’ve got three boys and they’re busy, active and love being outside. Beijing is a great place to get that outdoor activity. Beijing is extremely modern, well provided and a great destination. We have a long way to go to get people to engage with the destination – not just the hotels here.

If you weren’t managing The Opposite House what would you be doing and where would you be?

Hmm… I‘ve got about 10 answers to this question.

I would probably be a marine biologist somewhere on a boat. I was a pearl diver in my younger days in Australia and I probably enjoyed that 12 months of pearl diving as much as any other time in my life.

Living on a boat and out to sea for literally months on end. What you experience is completely different to what you see in big cities like Beijing. I don’t get to dive often now but whenever I am near the sea I like to be in the water.

Ah, so that’s why the swimming pool is your favorite space in The Opposite House!

Yep I’m a water guy. I grew up sailing and surfing and later diving so that’s what I like to do. I started traveling when I was 21 with a hospitality degree under my belt and I haven’t really been back since.

Discover Beijing on a private Beijing tour and check out the latest art exhibit at The Opposite House.