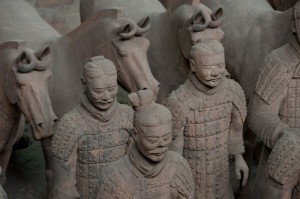 Four decades ago, local farmers in Shaanxi province were hard at work digging a well when they came across one of the world’s grandest archeological discoveries. Four chambers were eventually unearthed, filled with over 6,000 soldiers, horses and chariots arranged in military formation. Now travelers from around the world come to see these treasures and hear stories of the ruthless Qin Shi Huang Emperor who unified China and had a fondness for burying things, both statues and dissidents.

In celebration of the discovery a new exhibit has opened in Xi’an displaying special never-before-seen pieces including clay fragments that still retain some of their original color. The exhibition will continue until March 2015.