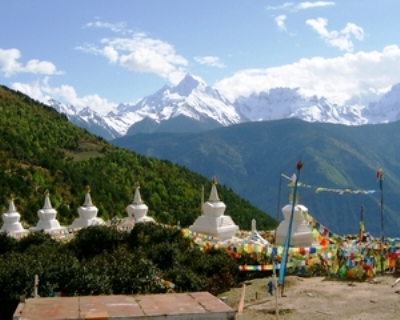 Unfortunate travel news out of Tibet: foreign travelers are not being allowed into Tibet this month and no clear timetable for when they will be allowed back into the region has been given.

The most recent block on foreign travelers comes on the third anniversary of the pre-Olympic anti-government riots that took place in Lhasa and other Tibetan regions in March 2008. Foreign travelers were kept out of Tibet for a year after the riots.

Given the already substantial logistical challenges of planning a journey to Tibet, unclear government policies are enough to make some travelers give up on their dreams of traveling to the ‘roof of the world’ to experience its breathtaking landscapes and understand its people.

But there is more to “Tibet” than what is contained by the autonomous region called Tibet. Northwest Yunnan, western Sichuan and much of Qinghai are historically, physically and culturally part of what was once the kingdom of Tibet and is now occasionally referred to as ‘Greater Tibet’.

Traditional Tibetan lifestyles can still be viewed in destinations such as Shangri-la, Kangding and Yushu, and the sacred snow-capped peaks of Meili and Minya Gongga rival all but a handful of the mountains found within Tibet proper in terms of altitude or awe-inspiring size. Yunnan and Sichuan not only have beautiful and authentic Tibetan regions, they are also home to a mindblowing variety of topography, climate and cultures.

If you are planning a China trip and want to include a Tibetan experience, keep in mind that what is commonly thought of as “Tibet” extends well beyond the borders of the area that is currently off-limits. For more information about how to visit genuinely Tibetan destinations not covered by the ban, contact us today.