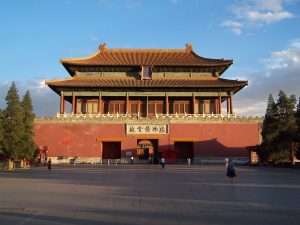 When having a travel to Beijing, The Palace Museum (known as the Forbidden City) is a must-see attraction. Before going there, just have a review on it from other visitors’ experience there.

The moment when entered the Forbidden City, I was still very excited. I finally can step into the place I could only see in the documentary. I have to say that even though it was just entering the door, I have already felt the royal style. We have been walking into the Forbidden City along the central axis, passing through the Meridian Gate, Jinshui Bridge, Taihe Gate, Hall of Perfect Harmony, Hall of Central Harmony, Hall of Preserving Harmony, Qianqing Gate, Qianqing Palace, Kunning Palace, Royal Garden, Shenwu Gate.

The palaces that passed along the central axis, to the QianQing Palace in the interior, especially the Kunning Palace, have been eclipsed, they are gloomier, but you will have a feeling of crossing the ancient to the modern times. It was the eaves that emperor and the queen who could appreciate it by just raising their heads many years ago. The dragon symbolizing the majesty of the emperor can be seen everywhere in the Forbidden City.

There were so many people visiting The Palace Museum, but the weather was not particularly strong. After a period of cloudy weather, it began to rain for a long time. When the Forbidden City appeared in the torrential rain, the walls were all wet, the stone road was also wet, reflecting the golden roof and the eaves. I especially like these beasts on the eaves of the palaces of the Forbidden City, which give the prim eaves a lot of life. The order of the beasts represents the level of the building, and the higher rank, the more number of beasts on the roof of the building. Later, if you watched various forecourt architectures before from the documentary, you also had to feel the architectural wisdom of the ancients on the Forbidden City.