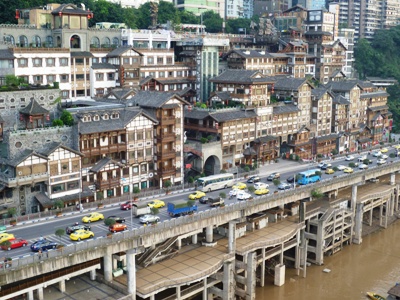 While many countries are talking about the travel possibilities afforded by high-speed rail, China is busy turning those possibilities into on-the-ground realities.

Shanghai had its stepping-out party during last year’s World Expo, but many people are still unfamiliar with Chongqing and Chengdu.

Famous for its sweltering heat, spicy hot pot and beautiful women, Chongqing also has a thumping nightlife, a thriving art and music scene, photogenic old alleys in the city and a Ming-era town on its outskirts.

China’s capital during the darkest days of World War II and now misleadingly called the world’s largest city, Chongqing is a proud, dynamic metropolis in the midst of a major transformation.

In many ways Chongqing feels like a new Hong Kong being built in Sichuan. Its large size, vibrant economy, deepwater port and the combination of mountains and water have similarities with Hong Kong, but the people, culture and cuisine are primarily of Sichuanese pedigree.

Chengdu has a flavor of its own, whether you’re talking about people, food, or culture. The former capital of the Shu Kingdom and the home of the mysterious ancient Sanxingdui culture, Chengdu has called its own shots during much of history. Its independent and proud spirit is still reflected in its people today.

Seated at the western end of the fertile Sichuan Basin, Chengdu has always been a city of abundance, which historically allowed its people plenty of free time. No wonder the city is known for its laidback teahouse culture and has produced many of China’s most famous poets and writers.

Chengdu is the epicenter of one of China’s spiciest regional cooking styles and is a must-visit for those of us who travel with our mouths. The Sichuan cuisine found in Chengdu restaurants is authentic as it gets: fresh ingredients and intense flavor combinations featuring the red chili and the mouth-numbing Sichuan pepper make the city an unforgettable culinary experience.

There are plenty of fascinating travel options in and around Chengdu, from the Sanxingdui Museum to the national giant panda breeding base, from the world’s largest seated Buddha at Leshan to the monkey-filled Buddhist holy mountain at Emeishan. Chengdu is also the jumpoff point for trips into Sichuan’s mountainous Tibetan highlands to the west and beyond to Lhasa.

If you’re considering a China trip this year and would like to spend time in Shanghai as well as exploring the country’s wild west, you may want to consider crossing the country at ground level rather than in the sterility of a plane cabin. Contact our travel experts today to find out how you can fit new transportation options into your upcoming China trip.