The following is an excerpt taken from The World of Chinese.  The author LeeAnn Deemer and her family traveled with AsiaTravel in August of 2010. Here is their story: 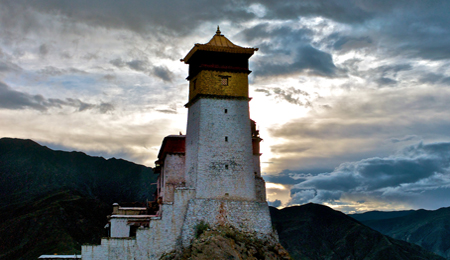 When we get off the plane in Lhasa, we can’t quite believe we are really in Tibet. This may have been partly due to the unscheduled stop in Chengdu which meant that we arrived hours later than we’d planned, but that was only part of it. The approach to Lhasa is vertiginous, as the plane banks left and right, dipping down below the peaks of the maze of mountains we are navigating. The runway is tucked into a narrow valley with mountains on either side.  Yet in retrospect the sensation of unreality upon leaving the airport in Lhasa is probably mostly caused by the altitude. I feel odd and slightly light-headed, and the colors around me all seem much brighter than usual.  The sunlight is intense and our surroundings look as sharp as cut glass. Lhasa itself lies about a 90-minute drive from its airport, hidden behind a chain of mountains, but Lhasa will have to wait. Excited to salvage what we can of the day, we head west, away from the capital towards the first stop on our seven-day itinerary, Tsedang.

We have brought three generations of the family on this trip—my husband’s parents who are long-time expats in Beijing and our two older children who are nine and six. We’ve left the three-year old in Singapore, where we live, as the altitude change is not recommended for children under five. The six of us bounce along the road with driver and guide, unable to tear ourselves away from the sights out the window. The town around the airport is so small that we are almost immediately in the countryside, passing farmhouses and fields. We see children playing, old women threshing on the side of the road, goats, sheep, pigs, dogs.

Tsedang lies in the Yarlung Valley, considered to be the cradle of the first Tibetan kingdom in the seventh century. We head directly to Yumbulagang, a fortress cum chapel which is said to be the oldest building in Tibet, although much of what one sees today is recent reconstruction. We only arrive about an hour or two before sunset, the last visitors of the day. Yumbulagang perches on the tip of a ridge, overlooking the flat green valley below. We are intimidated by the steep path and even steeper steps, as we’ve been warned not to exert ourselves for the first few days at this altitude. Any other visitors seem to have left hours ago, and we have our pick of the ponies, yaks, and one lone camel loitering in the parking lot with their owners, waiting to carry visitors up to side of the cliff. The view over the valley is spectacular, revealing neat green fields in the golden light of the setting sun. We have the place entirely to ourselves, and the only sound apart from the children frolicking in the distance is the flapping of the enormous tangle of prayer flags in the wind above the Yumbulagang.  The setting and the solitude conspire to fulfill every fantasy that I had ever had about Tibet—here I am in one of the most spiritually profound places in the world and I drink in the moment.