Exploring Beijing by bicycle is a great way to enjoy the sights and sounds of the city. We decided a bike-tour would be a great addition to our Beijing repertoire but we wouldn’t offer it to you unless we’d done ourselves – It was time for a test-drive.

A few weeks ago our travel designers strapped on their helmets, mounted their bikes and put the pedal to the metal on a whirlwind tour on Beijing’s most popular form of transportation.

Known as one of the most bicycle friendly cities in the world, Beijing’s flat roads and wide, dedicated bike lanes make taking your two-wheeler an ideal way to get around the capital. Follow in our footsteps (or our bike treads), with the details of the route that we took. You can hop on your bike and take a whirlwind tour of the city in typical AsiaTravel fashion: completely local and wildly creative. 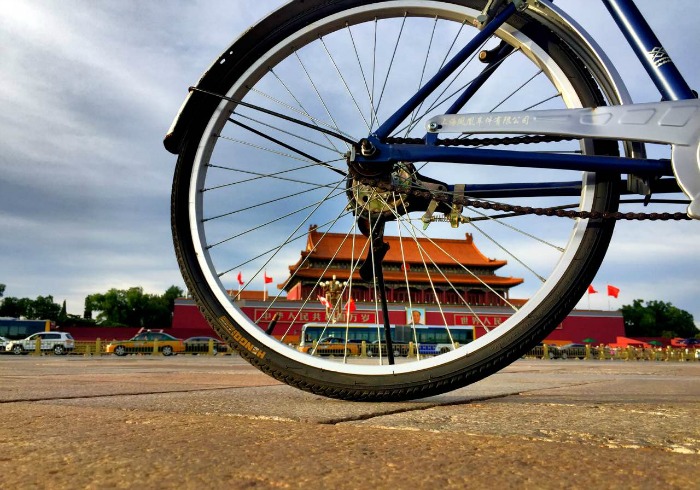 Our bike tour started out near the Drum Tower in the Gulou neighborhood. This area is known for its exciting side alleys and courtyard homes known as hutongs. Here, AsiaTravel can help you rent a bike for a whole or half day. 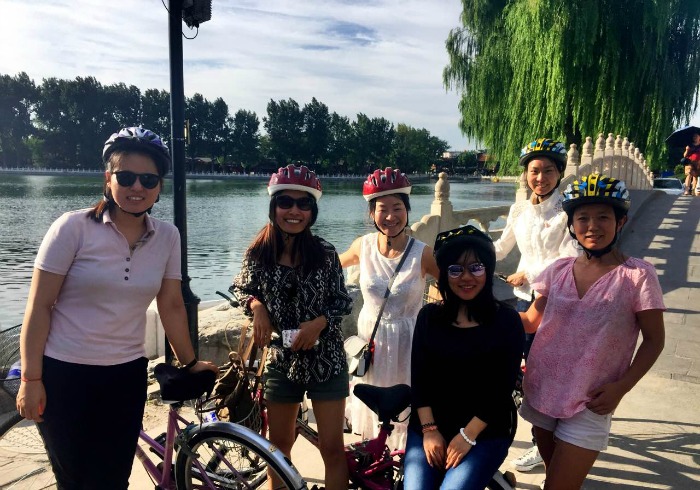 Cruising in Style Near Houhai Lake

After choosing our bikes, we set out around houhai, a beautiful man-made lake. Cycling around the lake is a fascinating experience in all seasons. In summer, boats shaped like ducks propel themselves under the low-hanging bridges and in winter, intrepid old men dive into the frozen lake in nothing but their Speedo’s. We even organize calligraphy classes on the banks of the picturesque lake. Biking is the perfect way to take in all of these unique, Beijing sights.

After conquering Houhai, we decided to get lost in the hutongs. These narrow side streets hold surprises at every turn. At first you may see a street vendor selling fresh persimmons falling straight from the tree and turn the corner and bump into an old man playing cards with his grandson while smoking a cheap cigarette. On a AsiaTravel hutong adventure, we’ll introduce you to our good friend: a cricket fighter who’ll invite you in to his home to learn the history of cricket fighting in these ancient alleyways. 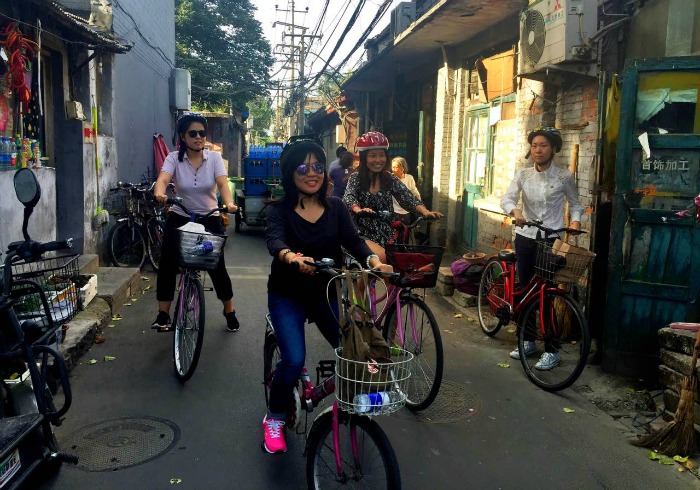 Rocking the aviator sunglasses in a hutong alley

Take it slow on your bike and take time to sip in your surroundings. Biking helps you maneuver around these crowded hutongs and not miss a single bit of the experience.

We followed the narrow pathways down south to Jingshan Park. We had to lock our bikes down at the entrance to the park, and we began our climb to the top of this small mountain. Our breaths were bated with anticipation for the panoramic view awaiting us at the top. And believe us, the view did not disappoint. 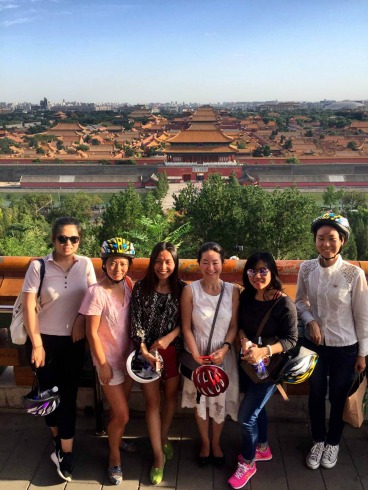 Jingshan with Our Helmets in Hand

We were able to see the sprawling metropolis of Beijing from all angles. But the belle of the ball was our view looking down over the Forbidden City. From the ground, it’s hard to see how magnificent and vast the Imperial Palace is but from the higher vantage point, we were able to see the grandeur of this centuries old sprawling royal residence. On a AsiaTravel tour we would walk down mountain and enjoy privileged access to the Emperor’s former childhood home within the red walls of the Forbidden City,

We ended our half day bike tour of the city with one of its most iconic sights: Tiananmen Square. This part of the tour was when taking a bike really shows its benefits. 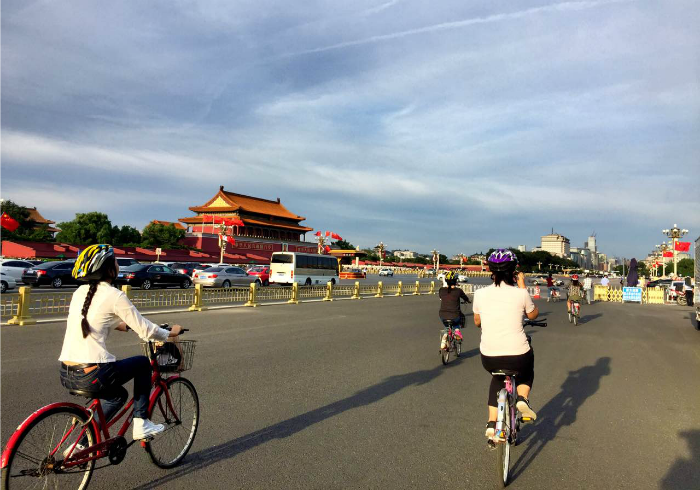 When you ride through Tiananmen on bicycle you’re given special access to parts of the road that are blocked to both cars and pedestrians. It’s a very privileged experience that is only available to bikers. This special access gives you one-of-a-kind close up views of this historical locale.

Touring Beijing by bike is a great way to set your own pace and really enjoy your interaction with the city. Just don’t forget to wear your helmet!

Now that this bike tour has the AsiaTravel stamp of approval, why not add it to your customized Beijing’s Past & Future tour.